Alex Faedo: The Road to the Motor City 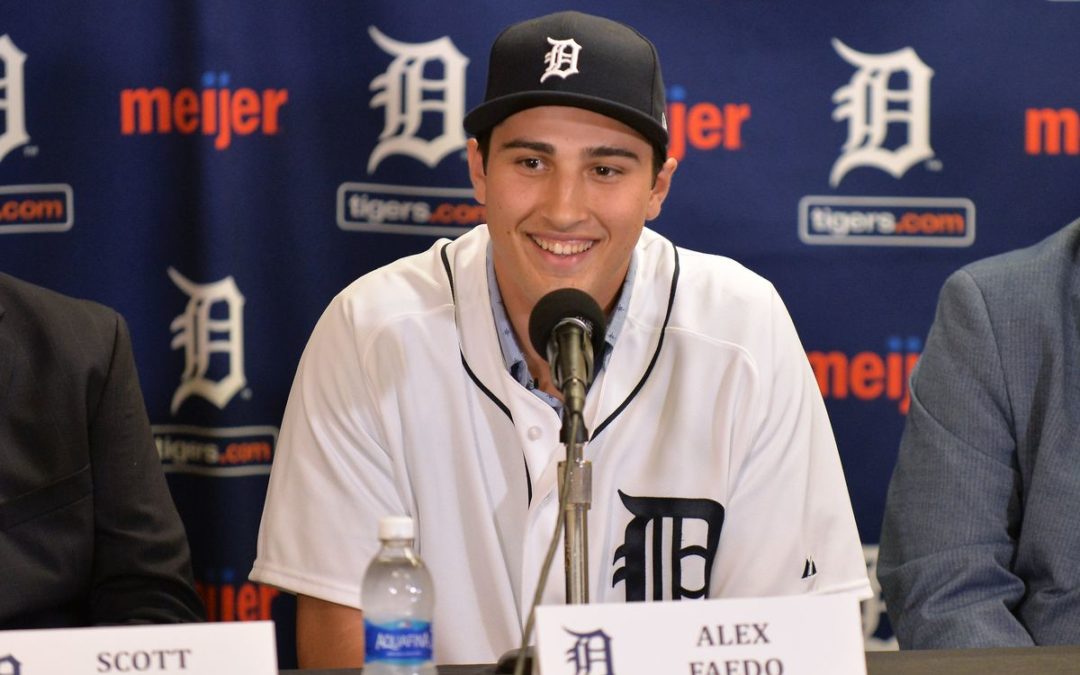 Alex Faedo was the Detroit Tigers’ first round selection in 2017 at pick 18. They actually selected him much later in an earlier draft directly out of high school, but Faedo chose to play college baseball for the Florida Gators instead. That was a great decision because he had a spectacular college career and was the staple of the 2017 College World Series. He also won second team All-American honors in 2017, as well as finishing up the season winning 9 games and only 2 losses to go along with striking out 157 in 123.2 innings.

In college while playing three seasons, Faedo dominated his final college stat line with 27 wins and only 6 losses. He also had a very great earned run average of 2.87 in 282.1 innings pitched as well appearing in 55 games.

After being drafted, he was assigned to play with the Lakeland Flying Tigers, the class A affiliate of the Detroit Tigers. In his pro debut, he retired 13 straight batters and pitched seven innings of two run ball. He went on to make a dozen starts in Lakeland before being called up to the class AA affiliate Erie SeaWolves.

When Faedo arrived in Erie, he was a little shaky which is very understandable. A lot of people say the AA level is where the players experience the biggest shock because of a drastic change in talent level.

I actually had the opportunity to watch Faedo pitch a game in Erie this past summer against the Bowie BaySox on a Sunday afternoon. I watched the majority of Faedo’s pregame bullpen session from directly behind veteran catcher, Josh Thole. That in itself was a great experience to see how hard he really throws and his pitches are so filthy. He seemed very locked and focused when he is warming up. Even prior to throwing, he goes off and throws in the outfield and walks around looking calm, cool and collected.

He is a lot of fun to watch on the mound. He pitches with a lot of energy and attacks the plate, which results in his absurdly low walk count that he is known for. He did struggle a bit, but he seemed to settle in a bit by the end of the season. He finished his year in Erie by winning 3 and losing 6, while compiling a modest earned run average of 4.95.

This year is already looking better for him in Erie. He was part of a combined no hitter, which he started. He has already won 3 games and struck out 69 in 56.2 innings with only 10 walks. With all of the quality starts, his number may be called sooner rather than later to make his way up to AAA Toledo to play for the MudHens. With that, he will be one step close to making it to the Motor City.

I hope to be able to see him make a start again in Erie this season. He is certainly one of my favorite to watch.