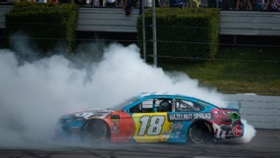 The Tricky Triangle was not tricking this Kyle Busch, as he would tame the long 2.5 mile track with only three turns, not four.

Kyle Busch, in the 18 Hazelnut Spread M&M’s Toyota Camry, has won the Pocono 400 at Pocono Raceway for the Monster Energy NASCAR Cup Series. Busch would start second, lead 79 laps, and would get his fourth win of the season. This is also Busch’s third win at Pocono (first coming in 2017 and second in July of 2018), fourth win of the season, and his 55th of his career, tying Hall of Famer and 1989 champion Rusty Wallace for ninth on the all-time wins list.

Two of his three teammates finished in the top 10. Erik Jones in the 20 DeWalt Toyota would not lead a lap, but finished third and Denny Hamlin in the 11 FedEx Office Toyota, who led one lap and finished sixth. The only car who did not finish in the top 10 was the 19 Bass Pro Shops/Tracker ATVs/Boats Toyota of Martin Truex Jr., who would have an engine problem while coming to pit road. Truex Jr would finish 35th.

Hendrick Motorsports had an up and down race. The highest finishers were Chase Elliott in the 9 NAPA Auto Parts Chevrolet Camaro, who led two laps and finished fourth, and pole sitter William Byron in the 24 Hendrick Autoguard Chevy, who led 26 laps. The other two were in the top 10 earlier, but fell later on when the pit stops happened. Alex Bowman in the 88 Axalta Chevy, who finished 15th (the exact same position where he started) and Jimmie Johnson in the 48 Ally Chevy, who was close to the top five but fell out later on. Johnson finished 19th.

Chip Ganassi Racing was having a decent day until the end. Kurt Busch in the 1 Monster Energy Chevy would pit a lot during the day with a few problems, but would still finish in the top 15 in 11th. Teammate Kyle Larson in the 42 Credit One Bank Chevy won the first two stages, but would make contact late with Clint Bowyer forcing him to go to pit road finishing a lap down in 26th.

Stewart Haas Racing had a dominant car that was competing against Kyle Busch. That was Kevin Harvick in the 4 Busch Light #Dad2Daytona Ford Mustang who was in the top five throughout the whole race, but a uncontrolled tire and then would have to comeback down to pit road for slight damage and steering to be fixed Harvick would finish 22nd. The other three finished in the top 10. Clint Bowyer in the 14 Haas CNC Ford finished 5th and led two laps, Daniel Suárez in the 41 Haas Demo Day had a penalty earlier and was backed up in 20th but would then finish in eighth place leading nine laps. The last car to finish in the top ten was Aric Almirola in the 10 Valley Tech Academy Ford who finished 10th.

All of the Team Penske cars finished in the top 15 with two finishing in the top 10. Brad Keselowski led four laps and finished second in the 2 Wabash/Supreme Ford. Defending series champion Joey Logano, finished seventh in the 22 Shell/Pennzoil Ford. Ryan Blaney would finish 12th in the 12 Libman/Menards Ford.

Rookie contender Daniel Hemric in the 8 Kalahari Chevy led three laps and finished 13th while his teammate Austin Dillon in the 3 Dow chevy finished last in 37th place as he would wreck.

The next race is the FireKeepers Casino 400 at Michigan International Speedway as defending winner Clint Bowyer looks for his first win of the season and to get Stewart-Haas their first win of 2019. He won last year in a rain shortened race.