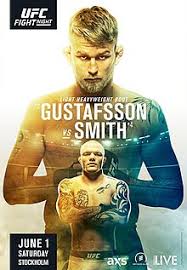 It’s Fight Week and you know what that means! It’s time for some picks and predictions. The UFC takes itself back to headliner Alexander Gustafsson’s home of Stockholm, Sweden this Saturday as he is set to face off against Anthony “Lionheart” Smith in the main event.

The excitement for this event is palpable. Fans wait in anticipation to see which fighter can return to form after both suffered losses in title bouts to champion Jon Jones.

As we look forward to this event let’s look ahead to what may happen and throw out some official picks shall we?

Another Swedish native on the card, Lina Länsberg (8-4) looks to bounce back after losing a unanimous decision to Yana Kunitskaya at UFC 229. Länsberg has alternated wins and losses in her last 6 fights and will no doubt be looking to please her hometown crowd with a win this Saturday.

Her opponent, former Invicta FC Bantamweight champion Tonya Evinger is also looking to get back in the win column. Currently on a two fight losing skid, Evinger’s most recent loss was a vicious TKO from Aspen Ladd who also holds a win over Länsberg.

Evinger (19-7, 1NC) will most likely use her vast experience from her 27 fight career to outwit Länsberg. And while Evinger’s experience outweighs Länsberg’s, I expect Länsberg to pressure her to the cage and use her Muay Thai to control Evinger and stall her movement.

Länsberg is strong in the clinch, throwing knees and elbows to wear down her opponents and soften them up. The veteran Evinger is certainly preparing for that. Using her footwork and movement to stay away from the cage, we could see Evinger shoot for some takedowns and if the opportunity arises, attempt a submission.

Länsberg will be giving up a 4.5” reach to Evinger which may play a big part if Evinger utilizes it and keeps Länsberg from closing the distance. If Länsberg can find her way inside the reach and get ahold of Evinger, she might control the whole pace of the fight by keeping Evinger pressed against the cage.

Evinger will look to remain elusive and use her veteran instincts to stunt Länsberg’s game plan as well as look for opportunities to get her opponent to the ground. 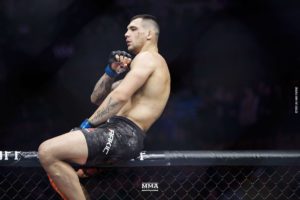 When Jimi Manuwa and Thiago Santos were set to fight at UFC 231, we knew we were in for a war. What we got was a slugfest of epic proportions. The two threw hands for virtually all 5 minutes of the first round, a round that could arguably have been called round of the year.

Santos would KO Manuwa in just 41 seconds of the next round and put himself in line for a title shot, a title shot he will receive at UFC 239. But what of Manuwa? For the 39 year old this would be his third consecutive loss to a top contender. Obviously he is very eager to put an end to the losses and comeback strong.

Aleksandar Rakic (11-1) made his UFC debut in 2017 and has since added 3 more wins to his 11 fight win streak that dates back to 2012. In fact, Rakic’s only loss was his first professional fight against Christian Radke via submission. He hasn’t lost since.

The 27 year old prospect from Austria has 8 knockouts to his credit including his recent TKO of Devin Clark at UFC 231. He looks to keep that same momentum going into this fight.

The excitement only intensifies as we take a look at Manuwa’s body of work. 15 of Manuwa’s 17 wins have come by knockout. Combined, these two have 23 KO’s/TKO’s. I think it’s fair to say that this is going to be an all out brawl.

Both fighters may be patient and pick their shots, choosing to forgo wasting any unnecessary energy in the early rounds. It’s much more likely that we will see Rakic trying to put Manuwa away early though. Manuwa (17-5) has only ever struggled with the top of the division and remains a fluctuating top 5 contender himself. He will bring a 22 fight career of experience with him as he looks to stop the surging young contender.

Don’t blink in this exhilarating matchup as I don’t see any way this one goes to a decision. 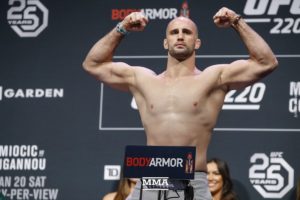 Stockholm’s own Ilir Latifi comes into his home turf looking to recover from the decision loss he suffered at the hands of Corey Anderson. Volkan Oezdemir remains a top contender despite 3 losses in a row now to the likes of current Heavyweight and former Light Heavyweight champion Daniel Cormier, one half of this card’s main event Anthony Smith, and a narrow split decision to rising Light Heavyweight Dominick Reyes.

Oezdemir (16-4), who holds a win over the aforementioned Manuwa, is tied with Latifi and Anthony “Rumble” Johnson for the most Light Heavyweight stoppage victories in less a minute. The man who calls himself “No Time” has certainly proven his quickness with 12 KO victories, most in the 1st round.

Latifi (14-6, 1NC) has proven versatile with wins via KO, submission and decision. The Swede will have the hometown advantage going into this fight and will look to overwhelm Oezdemir in the early rounds. Pressure may be a factor here if Latifi wants to close the distance and keep Oezdemir from having distance to work.

“The Sledgehammer” won’t be so inclined to allow Oezdemir to keep that distance he requires to finish off his opponents. He will probably plan to utilize his wrestling to get ahold of and keep control of Oezdemir. With Oezdemir grounded, he will have plenty of time to try and work for a submission victory. He may also want a similarly exciting knockout finish like his opponent for his Swedish fans and look to end Oezdemir night and hand him his fourth straight loss.

Oezdemir, on the other hand, is most likely looking to get back to his former glory and end this one in spectacular fashion to reclaim the “No Time” nickname. I’d say expect him to look for a quick KO to get Latifi out of there. If he can keep Latifi from closing in, he could find the sweet spot to light Latifi up with punches before going for the finish. 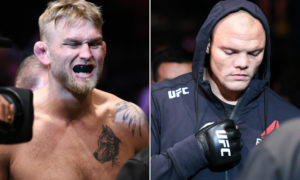 This matchup is interesting in so many ways. The fact that both men are coming off losses to the champion Jones, Gustafsson for the second time, would indicate that these two are at the top of their game still.

Anthony Smith (31-14) is in an interesting position. Having risen fast through the rankings with spectacular wins over Rashad Evans, Mauricio Rua and Volkan Oezdemir, he almost had a true underdog story on his hands. Most believed his chances of beating Jones were slim to none.

After a controversial knee was landed in the fourth round by Jones, Smith insisted that he was OK not wanting to take a DQ win and the championship from Jones. Instead, he nobly continued the fight although the action remained the same.

Despite the 2 point deduction, Jones won the fight by decision but was never able to put away the man they call “Lionheart.” For him, the loss to Jones was a disheartening one. He has been brutally honest about it in interviews, claiming he let everyone down. He knew what he had to do and didn’t, or couldn’t, “pull the trigger” and the resulting frustration has been the fuel for his return.

Having watched the loss “several, several times,” Smith feels this is his chance to move past his lackluster effort against the champion and simply be more himself.

In the opposite corner is the hometown hero Alexander Gustafsson. Gustafsson (18-5) has had a meeting with Jones, twice. First was his masterpiece, a controversial decision loss at UFC 165 in what pundits call the greatest title fight in Light Heavyweight history. Taking Jones to the edge as no one had before, Gustafsson’s second meeting with Jones was much anticipated.

The second attempt was far from his first. Jones controlled virtually every aspect of the fight and finished “The Mauler” by the third round via TKO. Having left no doubt that he had prepared, Jones proved he was the better fighter for the second time against Gustafsson.

Gustafsson began contemplating retirement, a move to heavyweight, a return against another worthy opponent, his distress was fairly clear. This matchup was the right one to make and a great one at that.

Gustafsson’s movement and footwork are fantastic and he utilized them to great effect against Jones in the first fight. Never one to stand in place, the ever moving Gustafsson can be expected to remain loose and elusive against Smith and look for openings to land some deadly uppercuts if Smith leaves himself open.

Another facet of Gustafsson’s game is his cardio. He is one of the few Light Heavyweights that can push for five rounds without getting tired. His durability also makes him difficult to finish having only lost twice by KO and once by submission.

They don’t call Smith “Lionheart” for nothing though. While he has been finished more in his 45 fight career, Smith has double the experience Gustafsson’s 23 fight career has. He has learned and continued to grow from his past fights and at 30 years old, he is at the peak of his fighting career.

But does the damage add up? Has Smith endured more wars despite his young age compared to Gustafsson? That’s where the “Lionheart” comes in. Always durable and digging deep, Smith is as difficult to put away as Gustafsson having only been finished by Thiago Santos since 2013.

The 32 year old Swede will look to stick and move, looking for an opportunity to swarm Smith and finish the night off to the delight of his hometown crowd. Smith is most likely to use that fire that’s been fueling him since the loss to the champion to come in and overwhelm Gustafsson, catching him off guard and cutting off his movements to pour on the punches.

Smith’s finishing instincts are long since earned from his experience in fighting. When he knows his opponent is hurt, he will overwhelm them til it’s over. If Gustafsson stays loose and maintains distance, or even baits Smith to chase him, he could exhaust “Lionheart” into the later rounds and take over from there.

Smith’s cardio is questionable after his noticeable fatigue in the Oezdemir fight. That said, the fight could end at any time for Smith early on and that wouldn’t even come into play. Furthermore, we saw Smith go five rounds with the champion and stick it out til the end with less fatigue than he showed in the Oezdemir fight.

Gustafsson is also very smooth with his takedowns, being the first man to ever takedown Jones in a fight, that I imagine we will see him attempt if Smith begins to get the better of the exchanges on the feet or for a level change.

Smith’s ground skills and submission game should be a cautionary concern for Gustafsson as he doesn’t want to get caught and choked out by Smith who possesses a black belt in Brazilian Jiu Jitsu.

All in all, this fight is very important for the division and both fighters involved. Smith needs to prove he had a rough night in his last outing and be more of himself with this one. Gustafsson needs this win to know he could potentially get one more crack at the belt before the 32 year old decides to hang up the gloves.

It’s such an intriguing matchup that fans can’t wait for and the one that is probably the hardest pick of the night. But I’ll give you one anyway.