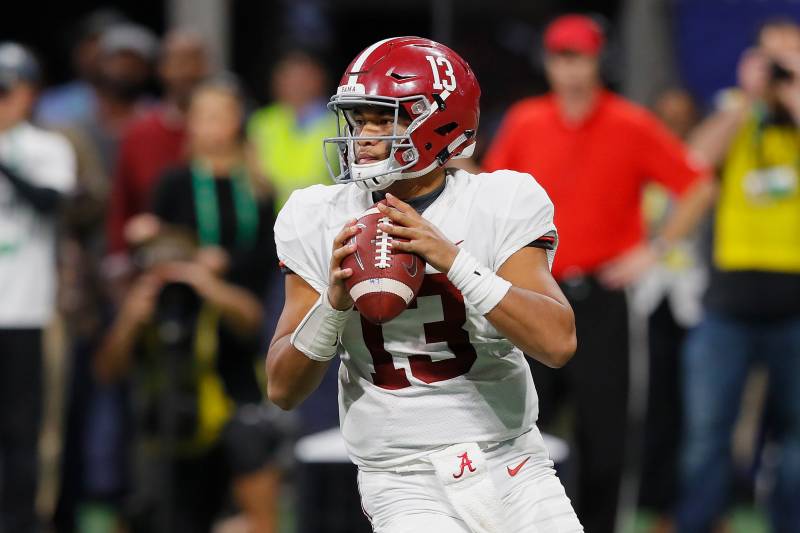 With the 2019 college football season inching closer every day, it is time to look at my potential top ten quarterbacks going into this season. It was tough to pick the top ten with so much talent at the position, but these are the guys that I believe have the best chance to finish with Heisman worthy performances. Shea Patterson is one of the luckiest QBs in college football because his team decided to bring in the best possible offensive coordinator to help him succeed. New OC Gattis is known for running an up-tempo, no huddle pro-spread scheme which is precisely what Patterson was used to running with Ole Miss. Patterson had 2600 yards with 22 touchdowns and only seven interceptions in 2018, and that was during a season where most believed he was being held back. Now that he has mastered the offense, built chemistry with their star players, and has an offensive coordinator that can scheme based on his skill set, I see an increase in performance. If Patterson improves even slightly over this past season, I can see him challenging former Michigan QB John Navarre’s single-season passing record of 3331 yards. One of the biggest surprises from last season was the emergence of QB Costello at Stanford University. Stanford was known as a predominantly run-heavy team thanks to the exceptional play of RB Bryce Love. Love is now in the NFL, leaving many to believe Costello will have even more chances to sling the rock. In 2018, Costello threw for 3540 yards, 24 TDs, and 11 interceptions. When he decided not to join the 2019 NFL draft class, Pro Football Focus graded Costello with the best overall grade of any returning QB in the Pac-12. There is one thing that is certain: Ian Book might have one of the best stories in college football. He is a three-star recruit that nearly all scouts deemed a career backup. Last season, he came out and threw for 2628 yards with 19 TDs and only seven interceptions. He led Notre Dame to an undefeated season, and into the college football playoffs. He looked solid in the Gold vs. Blue Spring game, and offensive coordinator Chip Long has done nothing but rave about Book. He has been quoted as saying that he expects Book to push himself even more in the 2019 season. If he can push himself further than in 2018, then he could be an elite QB this coming season. It is tough to say what Kelly Bryant will be able to accomplish this season, considering he didn’t play last year. He will now be starting with a new team after transferring from Alabama and will be working with offensive coordinator Derek Dooley. The last time Bryant started an entire season he had rushed for 665 yards and eleven rushing scores, thirteen TDs in the air, and over 2800 yards passing. His teammates have said nothing but positive things about Bryant and see him as a mature and calming presence in the locker room. With Dooley’s expansive playbook, Bryant can put up Heisman worthy numbers if he is anything like he was in 2017. Missouri is not Bowl eligible as of right now, so I doubt Bryant can even be nominated for the Heisman, but that doesn’t mean he won’t put up huge numbers. From one uncertain situation to another, Jalen Hurts looks to take over for former Heisman winner and first overall draft pick Kyler Murray. After backing up Tua Tagovaila at Alabama last season, Hurts will be joining the prolific offense that Lincoln Riley has put together these past few seasons. Oklahoma has produced the previous two Heisman winners at QB thanks to an explosive offense and great coaching. They have also led the nation in yards per play for the past two seasons. Hurts has some proven weapons with stars CeeDee Lamb and Grant Calcaterra, and his mobility will help him slide right into Murray’s place. A lot of experts are predicting that this Oklahoma team might have one of the best offenses in football this year, and that Hurts can be a Heisman candidate. I doubt Oklahoma will produce three recurring Heisman winning QBs, but Hurts undoubtedly does fit the profile. In the past two seasons, Jake Fromm has been one of the most efficient QBs in the country. He has thrown for 54 TDs with an average passer rating of 165.9. When you peruse through some of the top pundits CFP predictions, most of them have Georgia as one of the top four teams in the nation. If Fromm continues playing as he has in the past two seasons, I can’t see why that wouldn’t be the case. Georgia has NFL caliber weapons, elite coaching, and Fromm throwing the ball; I don’t see very many weaknesses. Texas star QB Sam Ehlinger put up some insane number in the 2018 season. Ehlinger threw for nearly 4000 yards and 41 touchdowns. He did this while missing two games because of injury. That might be the one concern I have for Ehlinger; his style of play is so physical that he often finds himself injured. I believe he will be coming into the season with tremendous confidence after the impressive performance he put up in last year’s Sugar Bowl. Most of his playmakers are returning, and I can see him putting up similar numbers to 2018. He may also find himself challenging Colt McCoy’s single-season TD record at Texas (45). If he does that, he might actually be in some Heisman discussions. The top three QBs are, unfortunately, pretty chalk. It is hard to argue against Justin Herbert as a top-three quarterback in the country. He threw for 3151 yards and 29 touchdowns in 2018 and has most of his big-name weapons returning in the 2019 season. When mapping out his offensive output for this coming season, I have him down for almost 4000 passing yards and 37 touchdowns. Herbert is already getting NFL first-round draft hype and will look to continue off his great season last year to solidify himself as a top-five draft pick. Oregon has a favorable schedule, going up against some weak passing defenses. I have Oregon down for 8-9 wins this year, and it is going to be thanks to Herbert’s excellent QB play. Last season Tua rewrote Alabama football history books, breaking the passing record with 3996 yards and 43 touchdowns. He was runner up to Kyler Murray for the Heisman trophy and will be looking to win it all this year. We all remember that the 2018 season finished unexpectedly with Clemson outclassing Alabama 44-16 in the National Championship game. That is the main reason I believe this Alabama offense will be so potent this year; they are out for revenge. They have the most manageable schedule in the SEC, meaning Tua will have plenty of opportunities to pad his stats. Alabama’s run game might be slightly weaker this year thanks to the NFL draft, giving Tua even more chances to throw the ball. It pains me to say it, but I can’t imagine a world where Alabama is not back in the championship game this year. Trevor Lawrence is arguably the best quarterback in the nation. After running Alabama out of the building in the championship game last season, Lawrence will continue to dominate this year. He is the odds on favorite to win the Heisman trophy at +225 at most sportsbooks. They are favored to win every game on their schedule, with the toughest being Texas A&M in week 2. At 6-foot-6 and 205 pounds, Lawrence has a rare combination of size, arm strength, mobility, and intelligence. When he is finally eligible for the NFL, he will most likely be the first QB off the board. Lawrence didn’t even start the 2018 season and still managed to throw for 3280 yards and 30 touchdowns. Just give him the Heisman now and save us all the wait.