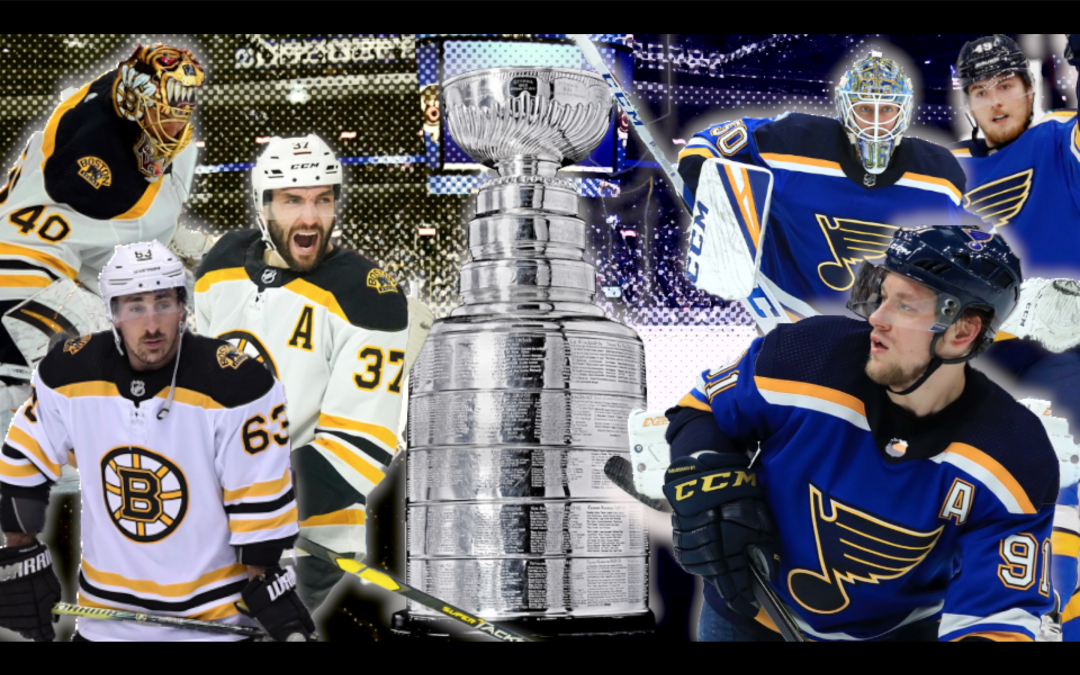 The final showdown has come. The Stanley Cup Final. Blues vs Bruins. The Blue Note versus the Big Bad Bruins. Today I will be breaking down how each team got to the dance and how I think they match up in a seven game series. I will also give my prediction as to who will win it all. So let’s get down to it!

Round 1: The Winnipeg Jets

This series was close and hard fought with five of the six games being decided by one goal. It also marked the beginning of Jayden Schwartz’s historic playoff run. He was a dominant forward in the series tallying four goals in six games. What was even more impressive was that three of his four goals came in the elimination game which vaulted the Blues into the second round.

Round 2: The Dallas Stars

I am sensing a trend here, another hard fought series, going the distance with the Blues coming back from a 3-2 series deficit to force a game seven. Patrick Maroon was the hero in overtime, and surprise, surprise, Jayden Schwartz was the dominant forward again in this series. Tallying another four goals to up his total in the playoffs to eight.

Round 3: The San Jose Sharks

Hard fought and close has become a calling card in these playoffs for the St Louis Blues, as this series was a battle until the end as well. Jayden Schwartz, one of the most dominant forwards in the playoffs, was at it again tallying another four goals to up his total to 12. Those 12 goals tied Brett Hull for the franchise lead in a single playoff. I have no doubt he will surpass that mark sometime in the Finals. In fact I predict he will do it in game one.

The San Jose Sharks fought hard in this series, but it was ultimately the hard work, perseverance of the Berube led Blues that pushed them to the Finals for the first time since 1970. The dominance of Jayden Schwartz and superb goaltending of Jordan Binnington sure helped as well.

Round 1: The Toronto Maple Leafs

Maple Leaf fans probably were not hopeful when the Bruins forced a game seven in this series, considering the Bruins had won the past two. After these playoffs, fans do not want to see the Bruins as a matchup option in the future. As a Canucks fan, I feel their pain, as the Chicago Blackhawks did the same thing to the Canucks until Alex Burrows broke the curse in 2011. Fans are just going to have to hope a similar thing happens in the future.

Brad Marchand was up to his usual antics in the series and it would continue throughout the playoffs. You can’t argue the skill he possesses, but he has got to stop with the stupidity. He accumulated four goals and nine points in this series, as he was a thorn in the side of the Maple Leafs once again.

Round 2: The Columbus Blue Jackets

Fresh off a series sweep of the Stanley Cup favorite Tampa Bay Lightning, the Blue Jackets were riding high. The rest and relaxation didn’t end up being a problem, as this series ended up being a six game battle with the Bruins ultimately coming out on top. David Pastrnak came alive tallying four goals in the series and Tuukka Rask was the dominant goaltender putting up an eye popping .943 save percentage. The Blue Jackets had a hard time solving the Conn Smythe contender. Rask put an exclamation point on his performance in this series by posting a shutout  in game six vaulting his Bruins into the Conference Finals.

Round 3: The Carolina Hurricanes

The Hurricanes aka the “Bunch of Jerks” fun ride came to a crashing halt as they hit the wall that was Tuukka Rask. Rask would continue his dominance in the crease only allowing five goals over the four game sweep. He also eclipsed his .943 save percentage in the last round with a stingy .956 in this one. Right now, he is my favorite for the Conn Smythe trophy. The Hurricanes just could not score, bottom line. Rask is one of the primary reasons the Bruins are in the Stanley Cup Final for the first time since 2013. Him and the refs, but I digress.

This series will once again be a hard fought one. Ultimately I think it will come down to goaltending and the stars coming to play. If Rask and Binnington continue their dominance in the crease, this will be a low scoring chess match. Berube and Cassidy will have to be at their best as this will be a battle of wits and clutch scoring. I for see a lot of overtime in this Final.

The St Louis Blues do not have a lot of experience with this time of year. Only David Perron and Michael Del Zotto have been in a Stanley Cup Final in their career. While the Bruins have many of their top performers as holdovers from the win in 2011 and loss in 2013. Marchand, Bergeron, Rask, Chara, Krejci and Moore have all been there before.

The top two goaltenders in the 2019 playoffs are in this series. Rask has carried this team from the second round on. His 1.84 goals against average and .942 save percentage lead the playoffs. He has been unbelievable and a brick wall in the crease.

Fortunately for the Blues, rookie goaltender Jordan Binnington is going to be a formidable opponent. While he has had games where he has looked less than stellar, Binnington has done everything asked of him. Wrestling away the starting position from Jake Allen at the end of the December, he has put together a 36-12 record since taking over. In the playoffs he has also put up a respectable 2.36 goals against average and .914 save percentage.

He will have to up his game however, to match the phenomenal numbers Rask has put together. Ultimately, I believe Rask will come out on top in this matchup.

Schwartz and O’Reilly versus “Perfection Line”

Schwartz will once again be front and center in this series. I believe he will rise to the challenge again. O’Reilly, who is his centerman, has also stepped up putting together 14 points in 19 playoff games.

They will match up against the “Perfection Line” consisting of Brad Marchand, Patrice Bergeron and David Pastrnak. They have been a difficult line to contain both in the regular season and playoffs. The Blues will have to be at their defensive best to stop them. If they do, the Blues will win it all.

The Bruins will win the Stanley Cup if…

The Blues will win the Stanley Cup if…