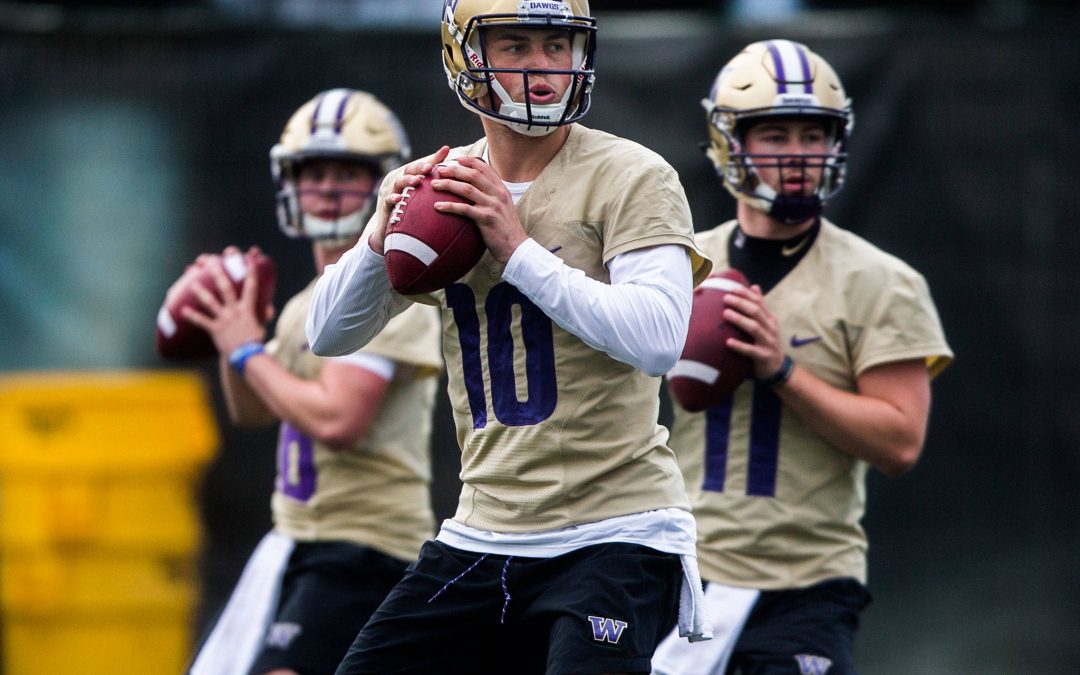 At the end of the 2018 season, after a disappointing loss to the Ohio St. Buckeyes in the Rose Bowl, many people began writing off the Washington Huskies. The narrative was straightforward; the window had now closed, and the team would lose too many critical pieces in the NFL Draft to compete in 2019. Little did they know, five-star recruit Jacob Eason was sitting on the bench waiting for his eligibility to officially begin. Knowing Eason was likely to become their starter in 2019, the Washington Huskies put together a stellar offseason. The team they have put together for 2019 will have the Huskies back in the College Football Playoffs for the first time since 2016.

The addition of Jacob Eason cannot be overlooked. Eason is an impressive specimen, and will most likely be in the discussion as a first-round NFL draft pick. During the Huskies spring game, he looked somewhat inaccurate at times, but his arm strength cannot be denied. Last year’s quarterback Jake Browning put up some great numbers, but he had trouble stretching the field. Eason will fit perfectly into Washington’s “old-school” system, and be able to use their weapons effectively.

Speaking of weapons, look at the WR core that Eason will have at his disposal. On the outside, Aaron Fuller and Ty Jones are two receivers with ridiculous potential. In the slot, they have Austin Osbourne, who was easily the most impressive player at their spring game and will most likely have the most chemistry with Eason. Not only are their core players extremely talented, but they have incredible depth with players like Marquis Spiker, Andrea Baccellia, and a top 50 recruit in Puka Nacua. With all that talent at WR, I haven’t even mentioned that Washington will have the best tight end in the country, Hunter Bryant, fully healthy this year. With all of these weapons, it wouldn’t surprise me if Eason is receiving Heisman hype by midseason.

As I said earlier, the last time the Huskies were in the playoffs was nearly four years ago. That playoff team was averaging an impressive 41.8 points per game, but since then Washington has regressed to 26.4 points per game. They have lost some NFL caliber talent since their playoff run, but this year they will be in great shape to be closer to their 2016 average. The offensive line is returning four experienced starters to protect Eason and give him time to utilize his weapons. The defense is where Washington was decimated by the NFL draft after losing three starters. The secondary will also be a concern with only one returning starter, Myles Bryant. However, they have reloaded quite well, thanks to Chris Peterson’s recruiting skills. In the last two years, he has brought in 26 blue chip recruits.

The biggest roadblocks for Washington’s playoff hopes is the pathetic SEC scheduling and the regression of the ACC. Unfortunately, there are certain teams (looking at you, Alabama) that have set cupcake schedules to ensure playoff consideration. Alabama and Clemson are all but guaranteed playoff spots this year. With two other spots available, Washington will have to go 12-0 to even be considered by the committee. They have the team to do it, but will face a number of challenging games to get there.

They have back-to-back tough games in weeks five and six against resurging USC and Stanford teams. Then in week eight and week nine, they go up against Oregon and Utah. I see that Oregon game as being their biggest test. It will be a quarterback duel for the ages between potential first round draft picks Eason and Justin Herbert. They also finish the year against dreaded rival Washington St. in the Apple Cup. Head Coach Mike Leach has Washington St. firing on all cylinders lately, but they could be facing regression this year. If so, Washington can come out of the Pac-12 as the only team worthy of playoff consideration.

Las Vegas certainly seems to agree with me; they have Washington’s win total set at a high 10.5 wins. Currently, Jacob Eason is not someone you can bet on winning the Heisman at most sportsbooks. I firmly believe his name will appear during the season. With a stud offensive line, incredible receivers, the best tight end in the country, and a QB that can sling the ball, the Washington Huskies have a legitimate shot at returning to the College Football Playoff.