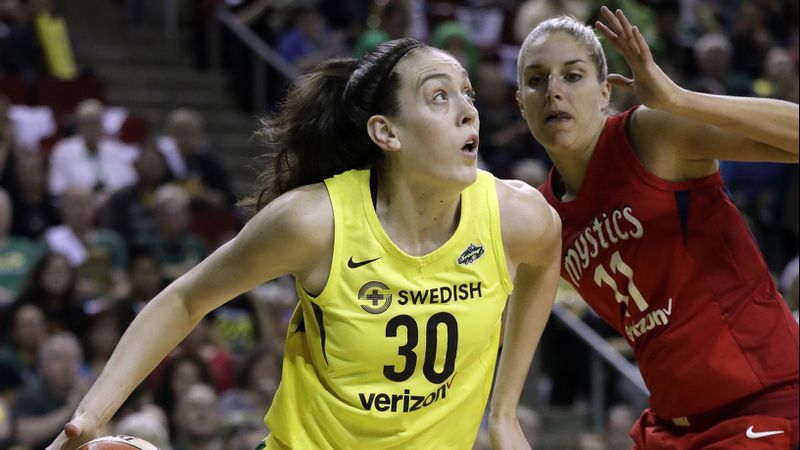 The MVP trophy for the WNBA is up for grabs as last year’s winner is unable to defend her title. Breanna Stewart will not be playing in the 2019 WNBA season, as she announced that she ruptured her Achilles in the EuroLeague title game. She is in the prime of her career, as she notched several accolades within the past year: WNBA MVP, WNBA Finals MVP, FIBA World Cup MVP, FIBA EuroLeague Women regular season MVP, WNBA Champion, and FIBA World Cup Champion. The talk of the town is not the injury, but the fact that even the WNBA MVP has to play in two leagues to maintain a stable living.

Here are a few statistics that may blow your mind: Breanna Stewart’s base salary is $64,538. The current WNBA maximum salary for veterans is $117,500. Elite players can earn up to, if not more than, $1 million per season. The minimum salary of a professional NBA player is $838,464. The average WNBA salary is $71,635, while the average NBA salary is $6.5 million.

You would think that someone as talented and accomplished as Breanna Stewart would make a lot more money than that, but we’ve all been fooled. It doesn’t matter how great someone can be in the female sports world, they will never come close to earning the same as the male sports world. It’s wild that WNBA players have to maintain two jobs to have a stable income, while some NBA players are set for life after one season. The general public is unable to name at least 50% of the NBA roster, yet the top ten elite players of the WNBA make an eighth of the worst player in the NBA.

But that’s America’s problem. The average woman makes 80 cents for every dollar a man makes from working full time. However, playing basketball is more than a full-time job. With practices, weights, meetings, recovery, interviews, marketing, and business deals, the players never have time for themselves. Hopefully, the increase in attention to women’s college basketball can help bring more focus to the upcoming WNBA season.

Having teams other than Connecticut winning the NCAA Tournament has also brought attention to other women’s collegiate programs. Notre Dame’s starting five, Baylor’s dynamic trio, UCONN’s elite seniors and other star college players will be having their inaugural WNBA seasons this year, and hopefully their press coverage can benefit the WNBA as a whole. Stewart’s injury is also making the public aware of the struggles that WNBA players must face.

The CBS Sports Network has been making a lot of smart moves to compete in the sports broadcasting market. Their contract with the NCAA was a boon, streaming the NCAA Men’s National Basketball Tournament, and runs through 2032. Yet, they made another move, this time in the professional world. The WNBA and CBS signed a multi-year deal in which CBS will cover 40 WNBA games in this upcoming 2019 season. Other networks that cover some WNBA games are ESPN, ABC, and NBA TV. Coverage on ESPN2 and NBA TV increased by 31 percent from last season. Other ways that the WNBA is marketing their league is the rebranding of the WNBA logo, new Nike uniforms, and a partnership with AT&T.

Leaders of the WNBA have communicated with the NBA and NBA Commissioner Adam Silver about what their priorities are for this upcoming season: salary and compensation, player experience, health and safety, and establishing a lasting business model for the league. With the NBA subsidizing a large percentage of the WNBA’s spending, they’ll need to further embrace professional women’s basketball.

For now, the players are playing basketball all year long without a break. They play months in the EuroLeagues, and if they make it to the playoffs, they have less time to rest and recover for the WNBA season. The only down time they have between the WNBA and EuroLeague is one month out of the year. Playing all year long can be stressful physically, mentally, and emotionally. They have to pick their sport over having a normal life, all year long. They miss out on holidays, family events, marketing for the WNBA season, and any kind of vacation. NBA players know that once the eight teams in their conference have clinched playoff bids, that they can start planning out month long vacations.