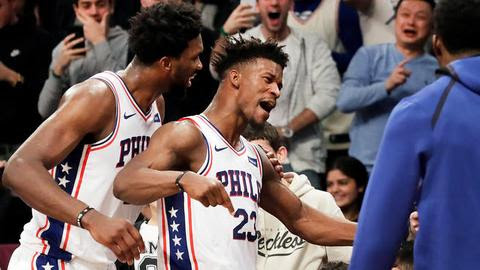 Elton Brand has made some bold moves since becoming GM of the Sixers. The former Los Angeles Clipper exchanged key pieces Dario Saric & Robert Covington for the temperamental Jimmy Butler. Questions arose early about the chemistry of the team and if he can get along with Ben and more importantly, Joel Embiid. Fans were skeptical on bringing in a star on the last year of his deal who could leave in the summer to sign elsewhere. He challenged Brett Brown earlier in the season about his role with the team but I would attest that more to coaching than Butler’s attitude. He has since accepted his role with the team, whether he is happy with that role remains to be seen. He averaged 18 PTS, 5 REBS & 4 AST in the regular season with the Sixers, looking nonchalant on the court at times and lacking the fire that we saw in Chicago and at times in Minnesota. He inevitably turned it on in the playoffs like I knew he would, averaging 25.6 PTS, 8.4 REBS and and 6.6 AST over a 5 game stretch in the Toronto series, carrying the Sixers when Embiid and Ben were struggling. He defended Joel Embiid when Jared Dudley decided he wanted the rounds. He rides for his team along with the #MikeScottHive. Others believe he is on his way out of Philadelphia. If the Sixers deem him unworthy of the max deal, here are 4 destinations I believe he could find himself in. 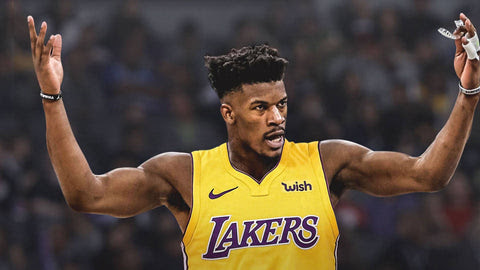 The Lakers have been on a downward spiral ever since LeBron James got hurt on Christmas Day and the team attempted to trade 75% of the roster for Anthony Davis prior to the deadline. LeBron missed the playoffs for the first time since 2005 and LA now has to figure out what next steps are after hiring new coach Frank Vogel. Rumors are swirling around about a possible Kyrie reunion, Kawhi possibly bolting to LA after the Raptors season is over or maybe even Klay Thompson after the Warriors inevitably complete the 3-peat. I don’t believe the Lakers will land any of the top tier free agents but could be in line to bring in some prominent second tier guys. One of which the likes of Jimmy Butler. I’m not too sure about the fit playing alongside LeBron James, a player that is most effective with the ball in his hands. Lonzo and Ingram aren’t the most efficient without the ball either. His defense would immediately help a Lakers team that is at the bottom of the league in defensive rating. Once the Lakers miss out on KD, Kawhi, Klay & AD, I wouldn’t be surprised to see them approach Butler for his services next.

.@JimmyButler IS GETTING IT DONE ON DEFENSE! 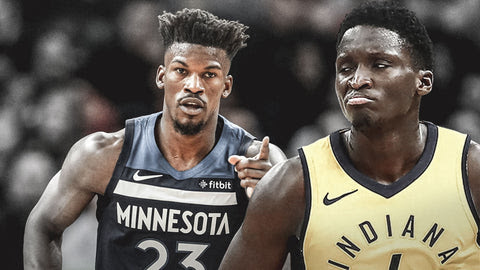 The Pacers boast an interesting situation for Jimmy Butler. He would be able to thrive playing with a scorer like Victor Oladipo and Myles Turner doesn’t demand offense like Embiid does. A Big 3 consisting of Butler, Oladipo and Turner could prove fruitful in the Eastern Conference. The Pacers finished 5th in the East after losing Oladipo for the year and Bojan Bogdanović proved a valuable piece in his place. Oladipo and Butler would most likely struggle together for the first few games as they both are prolific scorers with the ball in their hands. However, both players are also in the among the league’s best at creating scoring opportunities, both having assist percentages over 20%. The Pacers could also free up to $50M in cap space to pay Jimmy what he’s looking for while maintaining their bench (something the Sixers have failed to do). Jimmy Butler going to Indiana would give the Pacers their first household star since Paul George while being a defensive force in the league. 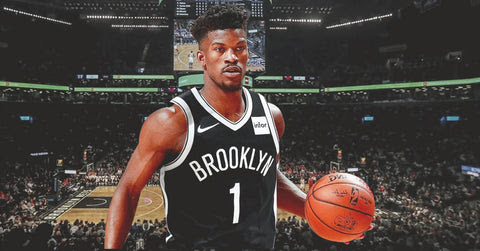 The Brooklyn Nets were one of the original teams that Jimmy Butler preferred to be traded to during his saga with Minnesota. Brooklyn then faced Butler’s squad in the first round in the postseason with some animosity and Jimmy’s stance may have since changed. D’Angelo Russell will more than likely win Most Improved Player of the year averaging 21 PTS and 7 AST this year (I’m sure Pascal Siakam will have something to say about it). Paired together with Spencer Dinwiddie they are an effective backcourt with promising pieces Caris LeVert and Jared Allen in the mix. Brooklyn seemed all but dead in the water at the beginning of the year. They caught fire late in the season and clinched a playoff berth with a young, impressive core in place. Perhaps it won’t be long until Butler has ice in his veins as well.

Loading….#DAngeloRussell gets it done for @BrooklynNets with 27 points & 11 assists! pic.twitter.com/NKvTUP5drS 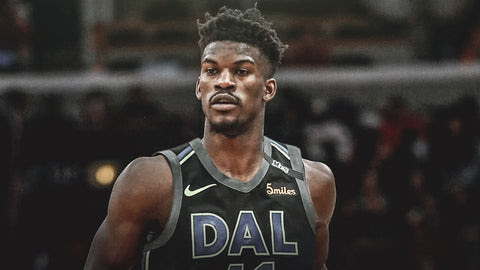 There’s literally two reasons why Jimmy would dream of going to Dallas. #1 – Uncrowned Rookie of the Year Luka Doncic. #2 – Kristaps Porzongis. Luka averaged 21 PTS, 8 REBS & 6 ASTS in his rookie campaign and lit the NBA on fire. He even led the league in most FGs made to tie or take the lead with less than two minutes in the game at 13. Also 2nd behind MVP candidate James Harden in step-back FGs made. Porzingis is literally the next Dirk in the flesh and if he can get past his injury woes, this could be the most lethal pairing we’ve seen in some time. Add Jimmy Butler to the mix and Dallas is right back in the playoffs. The Mavs have approximately $57.2M in cap space to pay Jimmy Butler if he leaves Philly. Luke is Ben Simmons-esque but doesn’t command the ball as much as Simmons and Porzingis doesn’t nearly need the ball as much as Embiid. The floor spacing alone would benefit Jimmy Butler, and a trio with him alongside Luka & Porzingis would put the NBA on notice.

Thank You for reading! Be sure to catch up on all episodes of The Philly Special Podcast on Apple Podcasts, Spotify, Anchor & more! #PhillySpecial