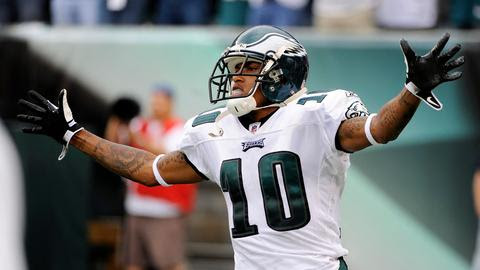 March 11th will forever be known as Jackson Day in Philadelphia. Just hours after the Eagles inked former Pro Bowl DT Malik Jackson to a 3 year, $30M deal (not $10M as previously announced), the Eagles traded to bring DeSean Jackson back to Philly. Here are 4 reasons why the reunion will help the Eagles immediately.

DeSean Jackson’s ability to burn defensive backs down the field is well documented. With Philly bringing back arguably the biggest deep threat in football, it immediately opens up the offense for the Eagles. DJax leads all NFL players with at least 200 catches with a 17.8 YPC average over the last 5 seasons. The Eagles have been looking for that type of home run hitter for the last few seasons. They tried to find it with Torrey Smith, but inconsistency marred his chances. The Shelton Gibson hopes seem to be dimming and Mike Wallace never even saw the field. Jackson still holds the Eagles record to this day of most 50-yard TDs (17) since 1960, while also still being one of the fastest players in the league at 32 years old. In 2018, Jackson reached 20+ mph on 8 of 52 touches, a higher rate than Tyreek Hill (per Next Gen Stats). With Jackson now opposite Alshon Jeffery, the Eagles have a player to take the top off the defense and open up the field for Wentz. Carson’s highest percentage throws are the routes that Jackson runs best. Wentz throws an out route at a success rate of 68%, while Jackson catches them at a success rate of 61%. The two are a match made in heaven on the field and it will sure be fun to watch.

2) Opens Up The Field For The Offense

With DJax back in midnight green, one could argue that Ertz is poised to break his own record in the 2019 season. If the Eagles can find a consistent run game, the offense could be the most explosive in the league. He is a perfect compliment to what the Eagles do on offense and now teams will have to start respecting the downfield threat. That alone, without Jackson even needing to catch a ball, will open more space for Wentz to operate. The long-winded narrative that Wentz targets Ertz too much will soon die a much needed death with DeSean in town. Jackson hasn’t shown any signs of decline at age 32 and his speed alone will take pressure off Alshon, Agohlor, and Ertz. The best thing about this acquisition is that Jackson doesn’t have to be a WR1. He doesn’t even have to have the ball thrown to him too much. His presence alone will be enough to make an immediate impact.

3) Eagles Don’t Have To Play Against Him Anymore

It was no secret that DeSean Jackson played his best football against the Eagles. He holds the record for most 50 yard TDs against the Eagles and Philadelphia’s secondary could never seem to slow him down. All we have to do is go back to Week 2 last season when DJax took off for a 75 yard TD on the first play from scrimmage. Jackson had 23 catches for 569 yards against the Eagles at 24.7 yards per catch. The Eagles were 1-5 in games they played against Jackson. Philadelphia can’t be any more happy to have them on their side of the field this upcoming season.

4) We Have A Reason To Revisit This Play Again

Never forget when DeSean Jackson walked off against the Giants.

Thank You for reading! Be sure to catch up on all episodes of The Philly Special Podcast on Apple Podcasts, Spotify, Anchor & more! #PhillySpecial