Baker Mayfield: The Savior of The Land 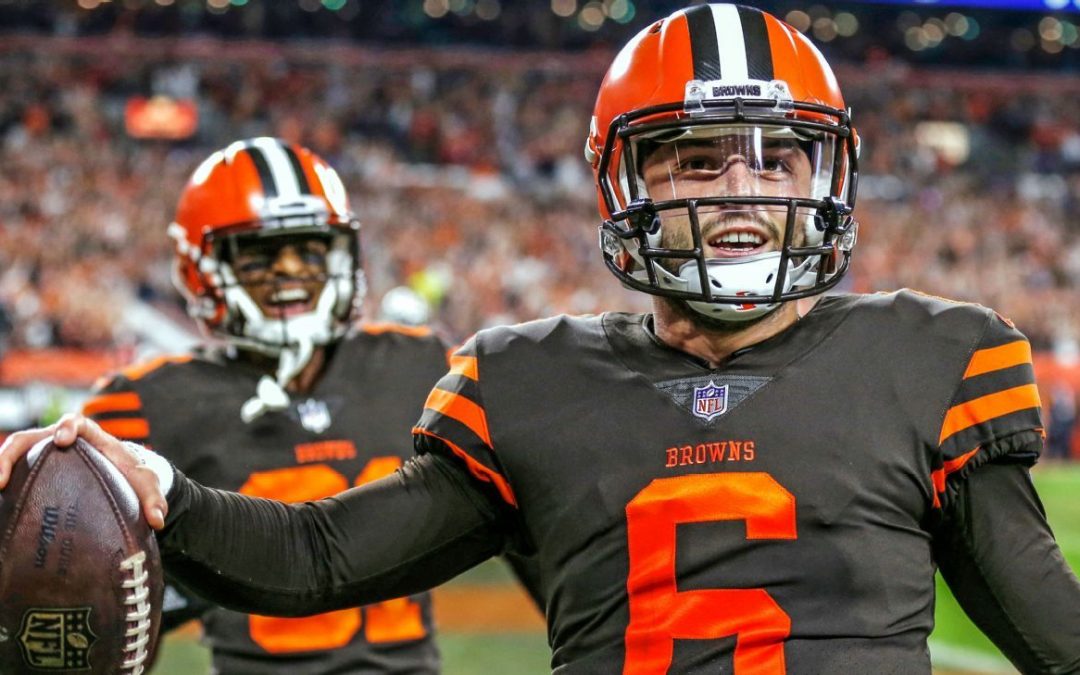 The Cleveland Browns: The laughstock of the NFL in 2017. A Hue Jackson led team that was destined for misery the second he stepped foot into the organization. Enter a guy some thought was going to be the answer: DeShone Kizer. He’s a guy with size, played college ball at Notre Dame, and also has a strong arm. Kizer headed into the Browns’ historic 0-16 season with a load of confidence, but the confidence did not lead to any type of success. He threw for 11 TDs to go along with 22 INTs and a passer rating of 60.5. Once the season came to a close and the Browns finished winless, myself and others lost all hope. Those thoughts of hopelessness and fear did not last long.

After what seemed like forever, the NFL Draft came along. The Browns had the number one pick in the draft. Who would they take? Sam Darnold, who everyone thought was the number one guy in the draft because of his size, arm strength, and NFL readiness? Josh Rosen?

Leave it to John Dorsey, a great mind in this day and age of the NFL. He is the guy who produced all the success that the Chiefs have been having. So why not just trust in Dorsey? What does he do on draft day? He goes out and drafts Baker Mayfield. A walk-on as well as a Heisman winner. He’s just a kid that can flat out play. A guy who wanted to come on this Browns roster and completely change the whole attitude of the team. He is a leader, a winner, and always plays with a chip on his shoulder.

Heading into the 2018 season, a lot of NFL experts around the league had high hopes for the Browns. Some were talking playoffs, while others were saying maybe 5-6 wins. Before drafting Baker, the Browns had acquired Tyrod Taylor from the Bills. Taylor is an established QB in the NFL, has had playoff experience, and he doesn’t turn the ball over much; but he was also known for not taking too many deep shots down the field. Taylor started out the season for the Browns at the helm. In Week One against Pittsburgh, he put up just an average performance, which ended up resulting in a tie. Heading into Week Two against the Saints in New Orleans, not many people thought the Browns had a shot in that game. They lead for most of the game, but ended up losing on a late Saints’ field goal. Little did Browns fans around the world know that in Week Three of the season, our culture would change for good.

Baker Mayfield entered the game for Tyrod with a little less than four minutes to go in the second quarter. First Energy Stadium was rocking. But then Baker came in and the whole team flipped a switch that had seemingly been waiting to be switched all year long. Baker ended up going 17 of 23 for 201 yards in essentially just one half, and lead the Browns to their first win of the season, as well as their first win in over a year. After that game and moving forward, Baker was at the helm for the Browns for the rest of the year, and they never looked back. He led the Browns to a great season that had us in the hunt for the playoffs almost up until the end of the regular season. Baker broke Peyton Manning’s single season passing touchdown record by throwing for 27 TDs with only 14 INTs. The Browns ended up finishing off the season with a 7-8-1 record, much improved from a winless season a year ago.

Baker Mayfield is the savior of The Land. He is the franchise quarterback for the Browns. Cleveland is a football town. I can already tell you that he means more to this city than Lebron did. With all the pieces that the Browns have added to make his supporting cast so great, the Cleveland Browns will be a powerhouse in the NFL not only for this season, but many NFL seasons to come.