Is Darron Lee In The Jets Future? 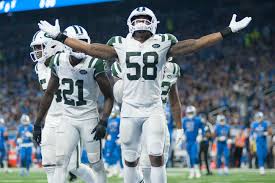 It really started to look like Darron Lee was about to take another step forward for the Jets in 2018, and then he was hit with a four-game suspension at the end of last season. For many Jets fans, that spelled doom for the linebacker.

Since being picked in the first round of the 2016 NFL Draft, Lee hasn’t lived up to being a first round pick. After playing 4-3 outside linebacker at Ohio State, he shifted inside to fit the Jets 3-4 scheme, and just when things started coming together, it all came crashing down when the suspension hit. With trade rumors circling during the offseason, it seemed like Lee’s tenure in New York was coming to end.

All the cards have line up this season. He added weight in what seemed to be a move to help his trade stock while his name was floating around leading up to the draft. However, the Jets couldn’t find a trade partner.

In the latest episode of The JetUp Bleeding Green Podcast, Michael Pallas breaks down a potential alternate narrative to the story even though the cards seemed to line up. He will also go over what we can expect from the Jets offense in term of personnel usage from new head coach Adam Gase.