The Most Important Summer In Knicks History 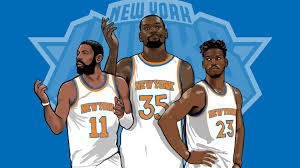 Living in New York as a lifelong Knicks fan, I have endured a lot of suffering and frustration when it comes to this franchise. From being the laughing stock of the league all of the 2000’s, to turning it around in the early 2010’s, just to be right back to where we started – a joke.

The peak of being a Knicks fan in the last twenty years was the 2012-2013 season. Carmelo Anthony was the league’s scoring champion and very much in the MVP discussions. The Knicks finished as the third seed with a record of 54-28, the first 50 win season since the 1999-2000 NBA season. On top of Melo’s heroics, JR Smith also won the sixth man of the year award. That Knicks team also had contributions from Tyson Chandler, Steve Novak, Chris Copeland, Jason Kidd, Raymond Felton, Iman Shumpert, Rasheed Wallace, and what was left of Amar’e Stoudemire. Since that season, New York hasn’t even sniffed the playoffs and has become embarrassing to watch. Since the 2013-2014 season, 37 wins is the most they’ve achieved and in that stretch, there’s been two 17 win seasons including this year.

At 17-65, New York had the worst record in the NBA, giving them one of the highest chances to win the NBA draft lottery on May 14. If the basketball gods bless the Knicks with the number one overall pick, Duke’s Zion Williamson will immediately become New York royalty. Unfortunately for them, the NBA and commissioner Adam Silver changed the lottery format this year to try and prevent teams from tanking. Before the changes, the team with worst overall record had, by far, the highest chance to land the number one pick at 25%. Now, the three lowest teams all have equal odds of landing the number one pick at 14%. The worst of the worst this year: Knicks, Cavaliers, and Suns.

What happens if New York doesn’t win the Zion lottery? Would another stud like JA Morant, RJ Barrett or Cam Reddish fit the mold? Well, here’s where it all gets complicated for the Knicks front office.

Landing Zion in the lottery would be ideal, but if they don’t, the front office might look to trade the pick. With the mid-season trade of former Knicks star Kristaps Porzingis, New York put themselves in a position to land two max free agents this off-season. With a loaded free agent class including the likes of Klay Thompson, Kawhi Leonard, Kemba Walker, Kyrie Irving, Khris Middleton, Nikola Vucevic, Jimmy Butler, Tobias Harris and the one who has been linked to the Knicks the most, the best player in the world: Kevin Durant. People close to both the Warriors and the Knicks expect KD to be sporting a Knicks uniform next season. If he comes, more than likely the Knicks will land another one of those names (Kyrie the most likely, in my opinion). If the Knicks don’t get Zion to pair with two max guys, they should realistically look to move young pieces and this years pick for another star to take this team to the next level. If that were to happen, Washington’s Bradley Beal and New Orleans’ Anthony Davis would be two intriguing names the Knicks could make a run for.

With a past nothing short of a joke, the Knicks finally have a future full of hope. The future is unknown, and a lot can change, but for the first time in six seasons, there’s serious hype surrounding this team going into the off-season. Now, let’s watch the balls fall and pray they land in the New York’s favor.