A Deep Look into the Pittsburgh Pirates Farm System 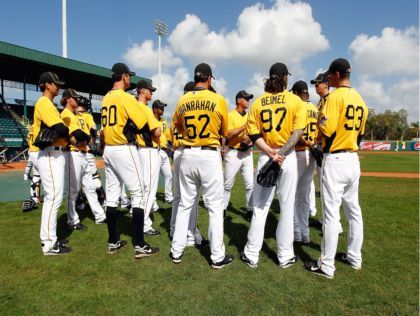 Many people know players on the Pittsburgh Pirates such as Chris Archer, Trevor Williams and Starling Marte, but not many know the upcoming minor league prospects.

The Dominican Summer League or DSL is a major level of the minor leagues. All 30 Major League Baseball teams have at least one DSL team, and some have two teams, such as the Pirates. The Dominican Republic is the country that provides the second most baseball players, behind only the United States.

Juan Pie is an outfielder who is only 18 years old is the number 28 prospect out of 30. He is a total speedster and compiled eight triples last season and 12 doubles. If he keeps this up, he will be in Pittsburgh very soon.

Starlyn Reynoso and Julio Rosario are two pitchers for the DSL Pirates 1 team. Reynoso is a lefty pitcher who can both start and relieve. Last season, he started six games, appeared in 16 games, and pitched 35.1 Innings. Reynoso could defenitly be a huge help to the Pirates out of the bullpen.

Rosario is a right hander, and the majority of the time a reliever. He has a great release that’s a low three quarter, almost sidearm style pitching motion that throws hitters timing off.

Moving up to the Gulf Coast League or GCL (the next level of the minors), the Pirates have a lot of great hitters at this level such as Jack Herman, Patrick Dorrian and Steven Kraft. All these hitters batted above a .320 average last year in over 30 games each!

Now moving onto the Low A, High A, AA, and AAA. This is where the majority of all teams top rated prospects are found.

Ke’Bryan Hayes, a third baseman who was in AAA Indianapolis last year, hit .293 and could have been called up in September last year, but he was only 21 at the time so the team wanted him to spend some more time in the minors and continue to mature. Plus, the Pirates are good at the third base position with Colin Moran and Jung-ho Kang.

Next up is Cole Tucker. He is a shortstop who played in AAA Indianapolis alongside Hayes last year. Tucker hit great at the plate last year. Tucker could be called up at anytime if there is ever an injury at shortstop. For now though, the Pirates decided to call upon fellow shortstop of Indianapolis Kevin Kramer instead of Tucker last week. At very latest, you can expect Tucker in Pittsburgh for September call-ups.

Mitch Keller is a right handed starting pitcher, played in all three minor league levels last year, and had an amazing season. He pitched 142.1 innings with a modest 3.48 ERA and won 12 games. Keller should be called-up if a starting pitcher is ever injured.

The Pirates are definitely on the road to success. The whole minor league system is filled with talent, and before long you’ll be hearing these names every day.