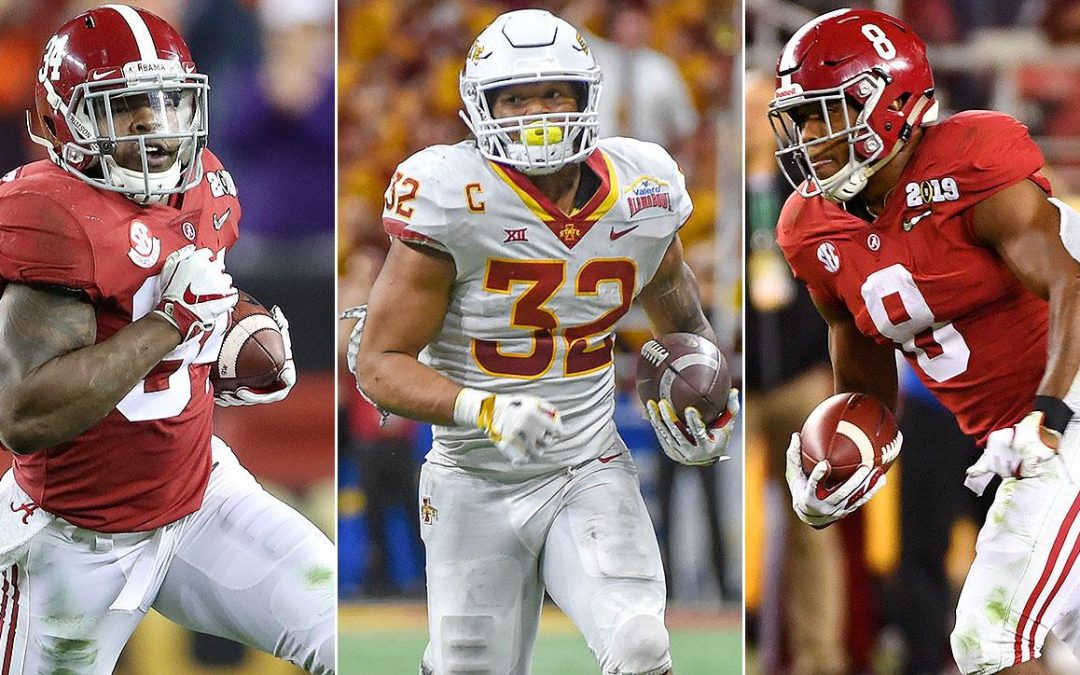 With the NFL Draft right around the corner, here are the top 10 running backs in this year’s NFL Draft. 1: Josh Jacobs, Alabama
Ht: 5’10” Wt: 220 lbs
A very talented back out of Alabama; Jacobs is the top RB in this class and probably the only one taken in the 1st round of the draft. He ran a 4.6 40 yard dash at his pro day. But, he looks much faster on tape. Jacobs fits today’s NFL perfectly as he can catch the ball and run the ball inside or out. He will most definitely be a Week One starter as a for-sure 1st round selection.
Draft Projection: 1st Round 2: David Montgomery, Iowa State
Ht: 5’10” Wt: 220 lbs
Montgomery is my personal favorite is this draft as he shows the ability to do everything at a high level. He is not a burner with his speed, but he sure can open up the field and force defenders to respect him. He is a very smart runner that can pound the ball between the tackles and is able to cut runs to the outside with patience. He consistently makes the first defender miss, and he will be a good back for all downs with a good catching ability. As balanced as he is, I’d be surprised if he isn’t an instant impact in the NFL.
Draft Projection: 2nd-3rd Round 3: Darrell Henderson, Memphis
Ht: 5’8″ Wt: 210 lbs
Easily the most explosive running back in the draft; Henderson can take any one of his carries all the way to the end zone. With his speed and quick cutting ability he is always a threat on any play. He should be valuable to any team in the draft, as he is a rare talent. I see Henderson as a Week One impact player on whatever team that selects him.
Draft Projection: 2nd-3rd Round 4: Damien Harris, Alabama
Ht: 5’10” Wt: 220 lbs
This Alabama starter showed elite strength on one of the best teams in the country. He takes the ball between the tackles in an elite way with pure power and one cut ability. Harris runs with good patience and a vertical running style. He isn’t super flashy, but he gets the job done.
Draft Projection: 2nd-4th Round 5: Travis Homer, Miami
Ht: 5’10” Wt: 200 lbs
Homer is the most underrated back this year for me. He has a lot of talent that fits today’s NFL with his speed and is a hard runner. He can take any run to the outside with incredible athleticism and with his ability to read open field blocks, he can take runs all the way to the end zone. However, I’m slightly worried about the competition he played against in college while playing at Miami University.
Draft Projection: 4th-5th Round 6: Devin Singletary, FAU
Ht: 5’7″ Wt: 200 lbs
For a small running back, Singletary does not shy away from contact. Without great speed, he still finds a way to run for big gains and make defenders stumble. He makes a lot of his highlights along the sideline as he has great control of his body and reads the field well. However, Singletary needs to clean up his fumbles when he gets to the NFL.
Draft Projection: 2nd-4th Round 7: Miles Sanders, Penn State
Ht: 5’11” Wt: 210 lbs
He was a supposed to be a star when he arrived at Penn State. He had to sit behind Giants RB Saquon Barkley for a few years, so he was pressured to show out on special teams until he got his chance this season at Penn State. He showed us why he was so loved as a prospect, as he showed an elite ability to shift away from every defender in his way. The biggest negatives about him is he needs to work on his blocking and he shies away from contact too often.
Projection: 2nd-3th Round 8: Tony Pollard, Memphis
Ht: 6’0″ Wt: 210 lbs
Pollard sat behind Darrell Henderson, but still showed that he can make a great impact on a team. Pollard is the type of player that can fill multiple roles on a team. He can return kicks, line up at receiver and catch passes, and also run the ball. He is a utility player and teams love players that can do multiple things on the field. He will be an absolute steal in this draft.
Draft Projection: 4th-6th Round 9: Rodney Anderson, Oklahoma
Ht: 6’0″ Wt: 220 lbs
A home run player, Anderson is a scary player to play against with his speed and shiftiness. He won’t be a dominant every down runner, but if used right, he can surely make an impact. He can run well, even without good blocking, and makes quick cuts in the backfield.
Draft Projection: 3rd Round 10: Mike Weber, Ohio State
Ht: 5’10” Wt: 210 lbs
I saw Mike Weber as one of the most pro ready players in this draft. He’s a very balanced back with great vision, can make the first defender miss, and takes inside runs deep for big yards. However, he does lack top end NFL speed and may struggle to stretch the field in the NFL.
Draft Projection: 3rd-5th Round