The Philadelphia Phillies are Back on Top of the NL East 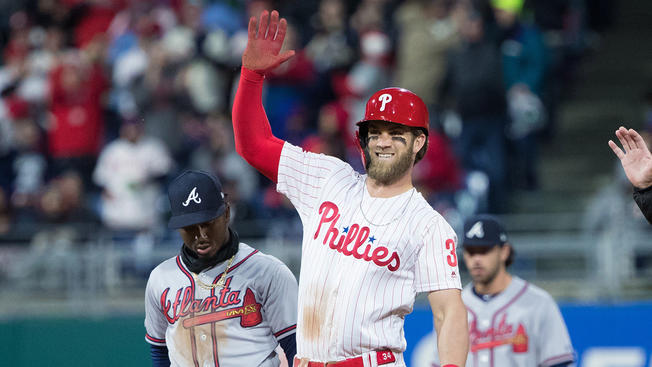 Philadelphia fans are over the moon, thrilled to have landed one of the two biggest free agents this off-season in Bryce Harper. After fruitless hopes of LeBron and even Kawhi Leonard coming to Philly last offseason, the worry that big stars don’t want to come here was smashed by the mega deal Harper signed with the Phillies. He may not be Mike Trout, but he is a great ball player, only 26 years old, and can still become a more consistent hitter as he matures.

The Phillies also added JT Realmuto, Andrew McCutchen, and Jean Segura to a line up that already included Rhys Hoskins and Maikel Franco, both of whom are off to red hot starts. The Phillies lineup has not been this dominant since the 2007-2009 glory years.

Harper is an imperfect superstar. Last year he made the all-star team, but his batting average was under .220 at the time. He was able to turn it on in the second half and get his average up to a stomachable .249. If he had been the only off-season acquisition the Phils had made, the fans would still be thrilled. When he hit his first solo shot as a Phillie to put his team up 7-4 in the second game of the season, an usher turned to a fan and said “It hasn’t been this loud in here since the last time they were in the playoffs.”

The other players GM, Matt Klentak, brought in are big time additions as well. JT Realmuto may be the best two-way catcher in the game and provides protection for Hoskins, who bats in the cleanup spot.  Andrew McCutchen is a former MVP who provides solid veteran leadership and can still play the game as well. Segura is a good defensive player and a guy who hits for high average, gets on base at a high clip, and has a little pop in his bat. The only weakness or potential hole on this team is pitching. Starting pitching more than relief, but the season is young, and it will not be a surprise at all if the Phillies trade for a pitcher before the deadline. They do have the assets to do it.

The Phillies in the first two weeks of the season are 7-2 and currently have the best record in the National League. Their mega star is fitting in well and they are getting production from almost every player up-and-down the lineup. Their GM, Matt Klentak, has shown so far that his big moves have paid off, and the Phillies won the off-season. It’s up to Harper, Hoskins, and the rest of the stacked lineup to show the rest of the league that all these moves were the right ones, and that the Philadelphia Phillies are once again a National League contender.