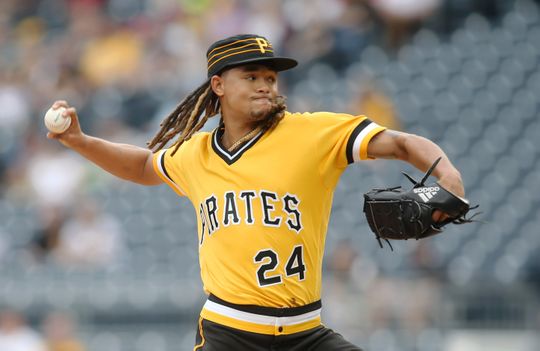 The National League has many great pitchers with big names such as Jacob deGrom, Noah Syndergaard, and Max Scherzer. However, the NL Cy Young Award winner this year will not be any of them. This year’s winner plays on the Pittsburgh Pirates, a team who has always been an underdog just like this pitcher. Chris Archer is the pitcher that will win the CY Young Award. Archer has a nasty slider this year and when he gets on top of it, the pitch makes batters look silly.

Archer loves to compete. People will scorn him and say things such as “he’s having too much fun” or “he’s showing too much emotion.” That’s the way Archer plays, he leaves everything out on the mound. If he strikes a guy out, he will not let them forget it and that’s a good thing. Archer is most at home out on the mound pitching.

Archer, no matter what it looks like, is having the time of his life out on the mound every fifth day for the Pirates. After striking a batter out for the third out, he will usually run and jump off the field. He takes a lot of hate for it because people say he can’t back it up, but he already has his first win of the season after his second start. The Pirates bullpen blew his lead in his last start, but Archer’s win-loss record was not harmed. Instead, it was a no-decision

The Pirates bats are heating up, but they can calm down quickly. Corey Dickerson is currently injured; he was a .300 hitter last year and he was crucial to the team.

Archer started his career in Tampa Bay with the Rays, where he was the ace. Archer does much better when he is not the only great pitcher in the rotation. In Tampa, he was the only notable starter. In Pittsburgh, the Pirates’ starting rotation is great. Trevor Williams had just over an ERA of 1.00 in the second half of the season last year. Jameson Taillon, Joe Musgrove, and Jordan Lyles round out the rotation.

The Pirates play in the hardest division in all of baseball. The only non-playoff contender in their division is the Cincinnati Reds. As of right now, if the Pirates play like they have been, Pittsburgh may be home to playoff baseball again. Maybe even the first World Series since 1979. Chris Archer and the city are hungry, and Archer will do his part by winning the NL Cy Young Award this season.