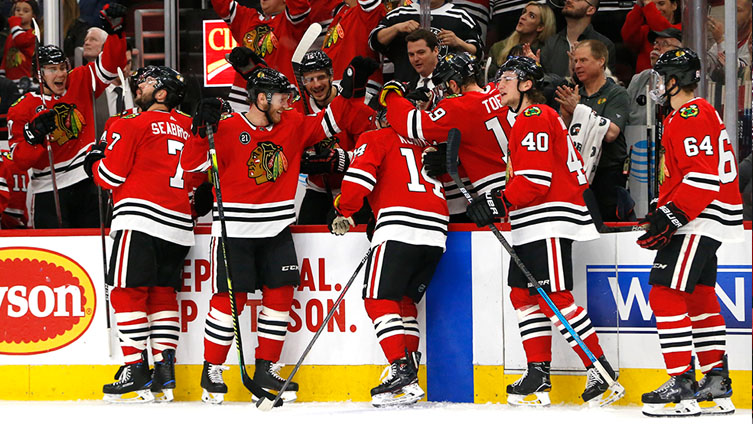 The campaign began with a 3-0-2 record, all of which were decided in overtime, and at least three goals per game in that stretch. October 27th is when the wheels started to come off. The team lost eight-straight and five games into that streak, Joel Quenneville was fired as Head Coach, leaving with a 6-6-3 record in the 2018-2019 season. Jeremy Colliton took over as Head Coach and on November 27th, the wheels fell off for the second time. Just six games removed from their eight-game skid, the Blackhawks went through another eight games without a point. Mark this as the third eight-game losing streak the team has had in the past two seasons.

It was clear the Blackhawks could score goals, but the timeliness of them was an issue as their line got shorter. Capped off by a 1-0 loss to the Arizona Coyotes, the Blackhawks went five-straight games without exceeding the two-goal mark. Any chance the Hawks had to turn “it” on, it seemed too late to get the wheels spinning again; or there would be a glimpse of hope, but it would quickly diminish.

Aside from poorly-timed dry spells, Chicago had a tough time killing penalties. A dead-last penalty kill was something the team saw push them out of games and swing momentum back to their opponents when the Hawks needed it most. There were 47 games where Chicago gave up a goal on the man advantage, and in 13 of those, the opponent scored multiple power play goals. 35-year-old Duncan Keith led the team with 70 penalty minutes, the third-highest total in his career. The next-most sitter was Brent Seabrook at 41 minutes.

On the other hand, Chicago’s power play was something to smile about for the most part. The team had a 15-game stretch where they piled up 20 power play goals. Throughout the season, the Hawks had ten multi-goal games with the advantage. A unit that was in the middle of the pack in the league was led by Alex DeBrincat with 13 power play goals.

Despite an overall disappointing season from the team, Jonathan Toews, Patrick Kane, Erik Gustafsson, and the aforementioned DeBrincat had their best years in the NHL. Toews finished the year with a career-high 81 points (35G, 46A). He also set a career-high in average time on ice at just over 21:00 per game and took more shots this season than in the past, sending 235 pucks to the net. Kane showed once again that he is one of the best to ever put on skates. With a career-high point total of 110, Kane led the team in goals with 44 and assists with 66. DeBrincat piggy-backed Kane’s effort by finishing second in goals with 41. That is 13 more goals than last season and he added ten more helpers with 34, showing that he is a big piece to the Blackhawks’ offensive efforts moving forward. The biggest surprise on the blueline was Erik Gustafsson. The 26-year-old led Chicago’s D-men with 60 points (17G, 43A) and joined just over a handful of defensemen around the NHL to reach the 60-point mark.

Heading into the offseason, there are question marks for this team with the obvious one being the penalty kill. The team’s defensive zone play needs to improve as the team gave up the second-most goals against. With the times the Hawks’ big guns went cold, some fans speculated whether or not the team needed another goal-scoring forward. I took these ideas to Twitter to see what the small sample size of fans I could connect with thought was the teams’ biggest need heading into next season.

What do you think the #Blackhawks biggest “need” is this offseason?

I then exchanged a modern-day interview via Twitter DM with @_88Showtime to discuss the team’s offseason.

He opened with what most Blackhawks fans are thinking headed into the summer: “The biggest need for the Blackhawks going into next season is defense…Stan Bowman ignored the issue last summer and it’s costing the team now. Hopefully he doesn’t make the same mistake again.”

Especially toward the end of the season, we saw the Blackhawks’ defense completely disappear at times: “Crawford, Ward, and Delia were all hung out to dry too often. The Blackhawks have allowed 34.6 shots per game, second to only the league worst Ottawa Senators. They’ve also allowed too many high danger scoring chances.”

@_88Showtime then added his thoughts on what could possibly be done to help out the Hawks’ defense.

“With the decline of Duncan Keith, the team lacks a true top pairing defenseman. That needs to be a priority this offseason…Maybe the Blackhawks take a run at Jake Gardiner in free agency, or maybe Erik Karlsson hits the market…Maybe they throw an offer sheet at Jacob Trouba and force Winnipeg to match it…” More great insight from a Blackhawks fan who has shown his dedication to the team all season long.

He continued to express what most fans are thinking, as he showed his frustration while Patrick Kane and Jonathan Toews had their best NHL seasons: “The Blackhawks just wasted career seasons from Jonathan Toews and Patrick Kane. They wasted a 40-goal season from Alex DeBrincat. If they want to go back to play in the Stanley Cup Playoffs and make one last run with this core, the defense needs to be fixed this summer.”

In a season where the Blackhawks scored more than five goals 21 times, the off-season should be focused around defensive changes and a new-look penalty kill. Toews, Kane, and others were surprised when no “help” was brought in before the deadline this season, which means if the front office fails for the third-straight time, we may see more than just upset fans around Chicago.

Head Coach Jeremy Colliton coming in mid-season did not help either. He and Quenneville, who will most likely have a job by next season, have different thoughts when it comes to game plans. With the ability to sit down with upper management and express his thoughts about where to go from here, it is safe to say the team will be shaken up a bit before September.

After a shootout win over St. Louis, Patrick Kane told the United Center crowd, “We’ll be back…We’re coming back stronger.” These words will be thought of during every move the organization makes this summer. #BelieveInOneGoal