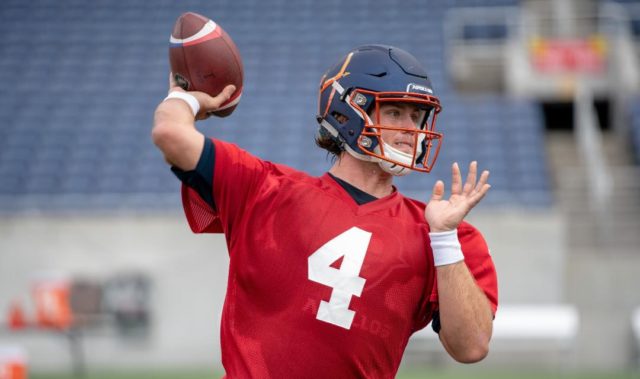 Kevin Anderson. This name is a name that you should know, but you might not. A former Marshall and Fordham quarterback, as well as an Orlando Apollos quarterback in the now defunct Alliance of Arena Football (AAF).

Kevin Anderson is someone who truly always brings energy when he’s on the field. He is also a tremendous leader when under center; and even on the sideline too. When in Orlando, he was always near coach Steve Spurrier, the Head Ball Coach, learning from him. When Anderson’s number was called in Orlando, he always made the most of it with either with his arm or legs. He is a great dual-threat quarterback and he can scramble around much like Johnny Manziel, but even better.

One of my favorite moments of him under center in Orlando was when he broke a big run in Atlanta when all of his receivers were covered. He was mainly slated as the third quarterback in Orlando, but he got some action and it was amazing to see.

A NFL team really needs to give him a shot. He can definitely learn a playbook quickly as he highlighted in the AAF. A team like the Denver Broncos would be a great fit. Yes, the Broncos just signed veteran Joe Flacco, but Flacco and Anderson could both destroy defenses! I know it’s improbable in the NFL to run a two quarterback system but hear me out. In Orlando, Garrett Gilbert, the number one quarterback, was a lot like Joe Flacco, a pocket quarterback with a huge arm. But, coach Spurrier incorporated using him and Anderson, which lead to wins.

If Denver would sign Kevin Anderson and start to implement him in their system, Flacco could teach Anderson even more! Anderson is already a total stud, but having even more of an arsenal of knowledge from a Super Bowl winning quarterback at his disposal would be incredible for his growth. And Flacco may only have a few more years in the tank. After Flacco’s time is done, Kevin Anderson could fully take over and become the best Denver quarterback since John Elway. Some might say it’s far fetched, but I truly would say Anderson is one of the most talented quarterbacks I’ve seen play.

I followed him all through his college career and watched his highlights countless times. I see nothing but potential in him and he is always looking to learn more. He is also a great leader, is always optimistic, and picks teammates up if they get down. That is one characteristic all teams should strive for in their quarterback!

If I was in a pro football front office, espically the Broncos, I would be studying Anderson’s tape and telling him to come out to the mile high city. This could be a groundbreaking move and lead to many playoff victories and Super Bowls. If I was running an NFL franchise, I can honestly say Kevin Anderson would undoubtedly be my QB1 and the GOAT.