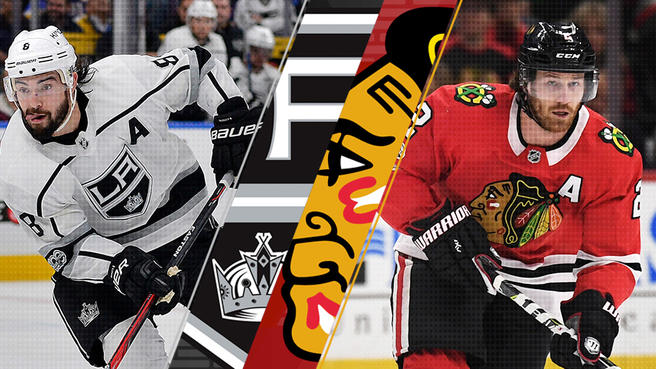 The Blackhawks visited Staples Center looking for their first win against the Los Angeles Kings this season. The Kings came into Saturday’s game winning three of their last five and Chicago was coming off a 5-4 win in San Jose.

First period action began with the majority of the momentum on the Hawks’ side. At one point, Chicago had the shot advantage 8-3 and were winning 80% of draws. The tides would turn when Chicago took the first of their two penalties in the opening frame. LA committed a two minute minor of their own, but neither team could cash in. Headed into the first intermission, the Kings had the shot advantage 14-9.

Alex DeBrincat scored for the third time in two games when his shot found the back of the net less than halfway through the period. The Kings would answer back when LA’s 21-year-old Austin Wagner flew past the Hawks’ recently extended Carl Dahlstrom to tie the game. Both teams would find themselves short handed, but escaped with no damage. Shot totals were 23-20 in favor of Chicago after two periods of play.

Momentum was in full swing for the Blackhawks for most of the third period. Just three minutes in, Erik Gustafsson blasted one that whizzed past Kings’ goalie Jack Campbell to give the Hawks a 2-1 lead. LA slowly started pressuring Corey Crawford until Michael Amadio sniped a shot past Crawford to knot the game up at two. Nothing doing for either side the rest of the way warranted bonus hockey.

A high-intensity overtime saw gassed players. So gassed that Jonathan Toews took a holding penalty with less than 30 seconds left. Scrambling to avoid a shootout, Drew Doughty send a laser past Crawford for yet another power play goal given up by Chicago and the game-winner.

The Blackhawks picked up one point and are now 34-33-11. LA snags two points and improves to 29-40-9. Chicago, in a game where they desperately needed two points, will remain outside the playoff race, six points back with four games remaining. Likely, the Hawks will miss the playoffs for the second straight year and will finish under the 90-point mark for two consecutive years as well.

The Blackhawks are back on home ice on Monday against the Winnipeg Jets, with the puck drop set for 7:30pm CT.