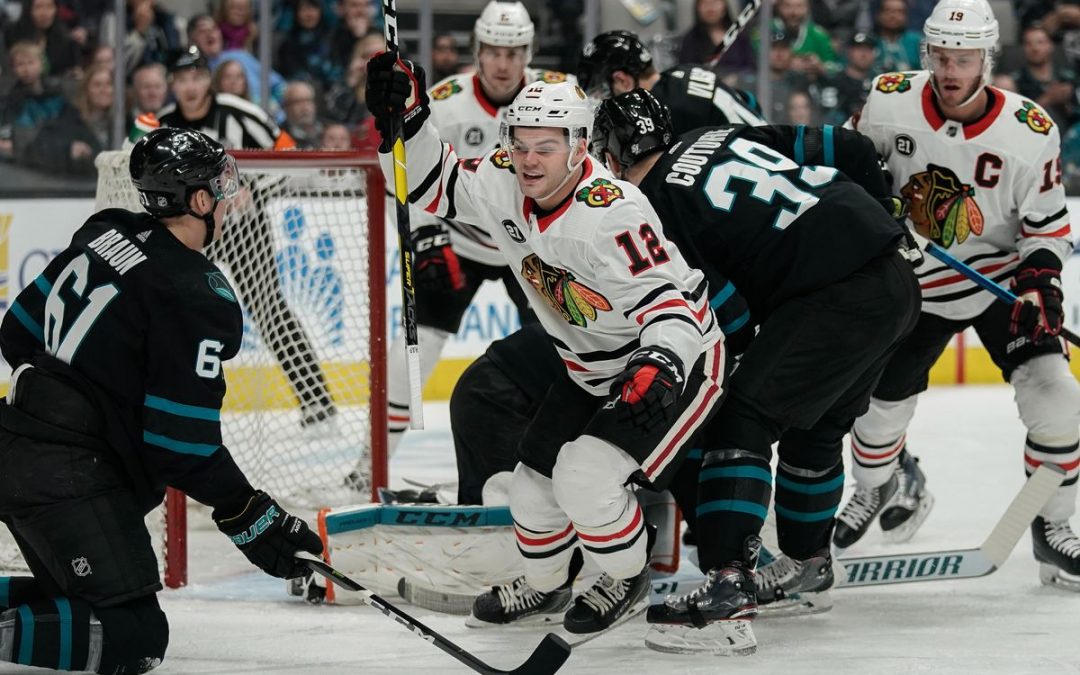 A Thursday night matchup in San Jose seemed to be just what the Blackhawks’ offense needed to revive itself.

The Blackhawks got off to a hot start inside the Shark Tank, scoring the first three goals. Alex DeBrincat on the power play, Connor Murphy, and Jonathan Toews all struck for Chicago. Later, Lukas Radil got San Jose on the board before the first intermission. Chicago took a two-goal lead into the dressing room despite two penalties from Brent Seabrook.

San Jose came out firing in the second period, scoring three goals of their own. Slater Koekkoek, Murphy, and Seabrook spent time in the penalty box that allowed the Sharks to capitalize on two of those minors. Gustav Nyquist opened the scoring with a power play goal that cut the Hawks’ lead to 3-2, but DeBrincat would answer back with his second of the night and 40th goal of the season. Tomas Hertl found the back of the net on a power play to slice Chicago’s lead in half and Timo Meier followed up with the game-tying goal to knot it at four. Just over two minutes later, Chris Kunitz tipped home a Patrick Kane shot to give the Blackhawks a 5-4 lead heading into the third period, something the team has not done since March 16 against Montreal.

The third period saw Corey Crawford make timely saves to hold the lead and more importantly, the Blackhawks stayed out of the box. San Jose ended the game with 30 shots on Crawford, none of which crossed the goal line in the third, and the Hawks put a stamp on a 5-4 victory.

DeBrincat’s second goal put himself and a teammate in good company. He and Patrick Kane, who has 41 goals, are the first pair of Blackhawks’ 40 goal scorers in the same season since Steve Larmer and Jeremy Roenick accomplished the feat in the 1990-1991 season.

The Blackhawks scored more than three goals in a game for the first time since March 13 when they beat the Toronto Maple Leafs 5-4. The penalty kill is still an issue for the Blackhawks as they surrendered a pair of goals on the man-advantage to the Sharks, but the power play seems to be clicking as of late. Chicago scored on one of their two power play chances in San Jose. DeBrincat, Toews, Kane, Brandon Saad, and Erik Gustafsson all had two-point nights.

Chicago moves back within five points of the Colorado Avalanche, who hold the final Wild Card spot at 83 points. However, the Arizona Coyotes and Minnesota Wild separate Chicago from a playoff berth as well. Colorado and Arizona play a must-watch game in Denver on Friday that may shake up the playoff standings.

With just five games remaining, the Hawks will try to keep their momentum going when they visit the Los Angeles Kings at Staples Center on Saturday. Puck drops at 9:30pm CT.