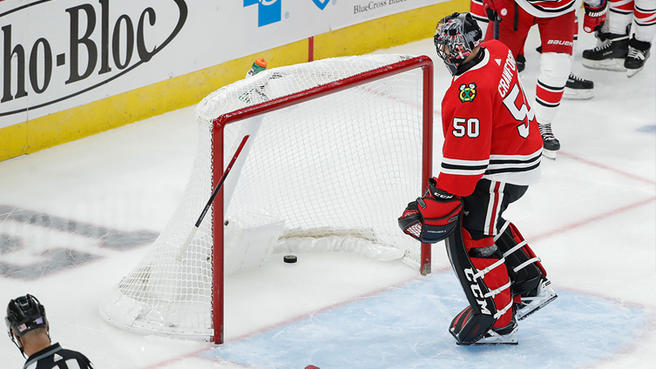 The Chicago Blackhawks had a golden opportunity to capture two points against the Arizona Coyotes on Tuesday and come within three points of a playoff spot. Once again, the ice cold offense could not get anything past Darcy Kuemper and the Blackhawks lost a huge game by a score of 1-0.

The game was scoreless until the third period when Coyotes’ Nick Cousins scored a power play goal with Brent Seabrook serving a two-minute tripping minor. It was the first power play goal either team had scored against one another all season and seemed to take the air out of the arena that was nearly 75% Blackhawks fans. Chances to tie things up toward the end were had by the Blackhawks, but wide shots by Alex DeBrincat and Artem Anisimov seemed to accelerate the game clock to 0:00. Corey Crawford made 28 saves in the loss.

Chicago is not mathematically eliminated from playoff contention yet, but the schedule for the team only gets harder going forward. There are just six games left in the regular season and the Blackhawks need to make up five points to contend.

The team will stay out west and begin their six-game battle against the San Jose Sharks, who have lost six in a row, but have the ability to play shutdown hockey against teams that struggle to score like the Blackhawks. In fact, in their last six games the Blackhawks have only scored nine goals and are 2-3-1 in that stretch. If Chicago wants to contend for a playoff berth, their league-worst penalty kill cannot be tested frequently or at all. The team did a much better job defensively in their own zone against Arizona and that needs to continue. Corey Crawford is about the only bright spot for this team. Since his return, he has made big save after big save and kept his team’s playoff hopes alive by compiling a record of 7-4-1 in 12 straight games.

Again, not mathematically finished yet, but most fans have written off this team after their loss in the desert. The Western Conference has been a disappointment as a whole and the Wild Card race is seemingly begging the Blackhawks to get back in it. So, with the following six games remaining, can the Blackhawks, who have had two eight-game losing streaks this season, make a final run?