Canucks Escape With a Win in Texas Despite Terrible Officiating 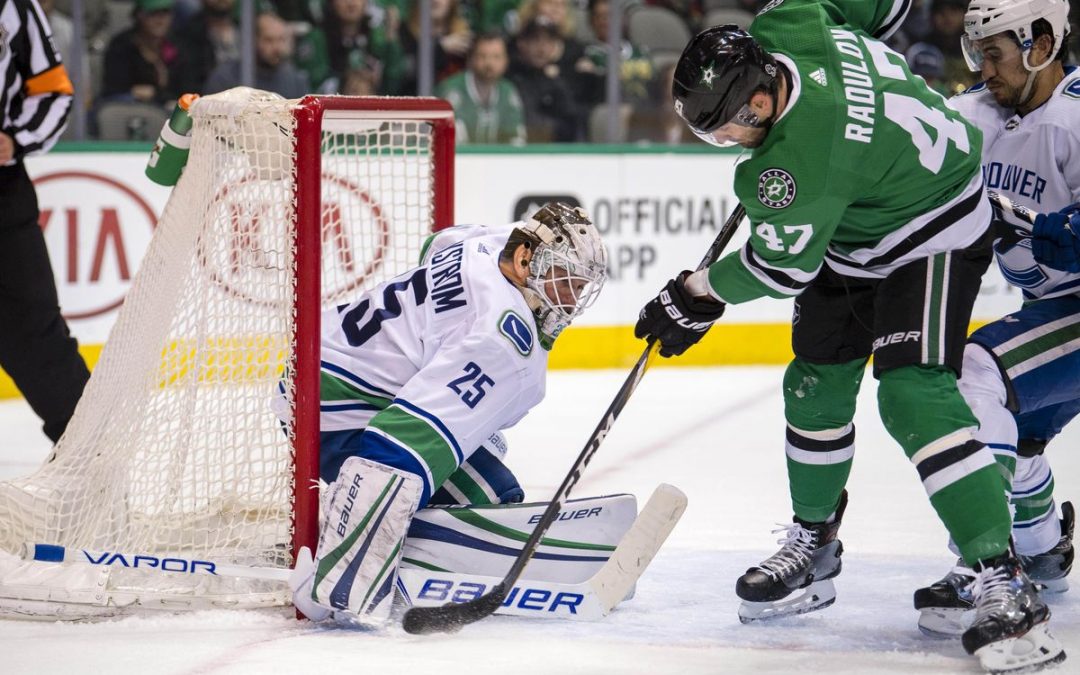 The Canucks do not have much to play for in their remaining games as they prepare to brace an off-season filled with roster speculation (and perhaps even front office speculation, but fans can only hope). Their competition,the Dallas Stars, are on the other side of the spectrum, clinging onto the remaining playoff spot with multiple teams breathing down their necks. They were be without their starting goaltender; who’s play has been nothing short of stellar as of late, Ben Bishop. Finding opening goals by an unlikely source, the Canucks outlasted the Stars 3-2 via a shootout.

Tim Schaller Gets His First Goal as a Canuck

March 29th, 2018, was the last day Tim Schaller found the back of the net. It had been nearly a year, and Schaller has found himself in and out of the Canucks rotation. After being asserted into the lineup for the second game in a row, that long-lasted slump finally came to an end. In the opening minute of the 1st period, Tim Schaller picked up the puck from behind-the-net, came out from a sharp angle and fooled Anton Khudobin to open the scoring on the very first shot of the game. The moment was a long time coming for Schaller, who had to be relieved to get one to fall. He had this to say in a post-game interview regarding scoring that elusive first goal as a Canuck, “I thought about it every day.” The wait for goal #2 would not be as grueling, as later on in the 1st period Schaller received a stick-to-stick pass from Elias Pettersson and made no mistake on the one-timed shot netting his second of the season. Notably, that assist tied Elias Pettersson with Ivan Hlinka and Pavel Bure for most points scored as a rookie in franchise history with 60. The Canucks opened up a 2-0 lead for the third game in a row (and blew a 2-0 lead for the second in a row). It was now up to the defense and Jacob Markstrom to keep that lead through the next 40 minutes of action.

It’s no secret that referees in any sport have a really tough job. Athletes have never been as big, fast, or physically gifted as they are today. The game moves by really fast, and in real-time it is understandable that some blown calls go undetected. However, on a penalty shot that is reviewable by the officials, there should not be room for error. Elias Pettersson was rewarded with a penalty shot after essentially piggy-backing Stars D John Klingberg down the ice (it was that blatant of a hold). The referees made no mistake in rewarding the penalty shot, the mistake came during the outcome of the shot. Anton Khudobin, in a very similar way to what Rangers netminder Alexander Georgiev did on a shootout against Capitals F Alex Ovechkin, threw out his stick in an attempted “poke-check.” That play is illegal and should reward the opposition with a goal. That was the call in the Georgiev/Ovechkin case, but not in this instance. The officials huddled together and decided that even though Khudobin threw his stick out at Pettersson, the outcome of the play should result in a no goal. With very few games remaining in the regular season; and consistency regarding reviews, this is a problem that needs to be fixed sooner rather than later.

That blown call proved lethal. The Stars picked up the pace and in the dying moments of the 2nd period, Jamie Benn scored through a screened Markstrom to split the lead in half. The play was initiated after Canucks F Tyler Motte failed to get the puck in deep on a line-change, leading the Stars to an odd-man break the other way. Jacob Markstrom, as he so often has done this season, kept the Canucks not only in the game, but in the lead. Making four saves on an early third period Dallas Power Play, and in the opening 10 minutes of the period steered away seven shots. He faced a barrage of shots, 46 in total, saving 44 of them. However, Dallas would finally find a way to even the score at 2. With just 3:50 remaining in the game, Taylor Fedun took a shot from the point that found its way to the back of the net through multiple screens. For the second game in a row, the Canucks had sacrificed a late game lead. Overtime proved to be a stalemate. Both teams had good chances to end the game; the Canucks had a Power Play in the OT period but could not solve Anton Khudobin. Dallas’ best chance came late, really late. With 1.9 seconds left in the period the puck was in the Canucks zone for a face-off. Seemingly harmless; except it was not. Tyler Seguin managed to get a shot on net that looked like it handcuffed Markstrom, but somehow he was able to fight it off. A shootout was going to determine the victor. After the first 3 rounds did not see a winner, Josh Leivo in the 4th round of the shootout froze Khudobin stick-side, scoring the eventual game winner to secure a victory for the Canucks.

Moving Forward for the Canucks

Vancouver flies to Chicago for a Monday night game against the Blackhawks in the second game of a back-to-back for the squad. A very appealing seven game homestand is waiting for them after that game.