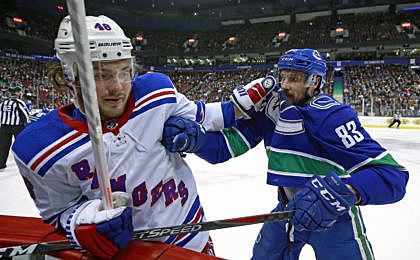 The Vancouver Canucks have played in three different Stanley Cup Finals. All have provided the same outcome: defeat. In 1994, they went on their second finals run in hope of capturing Lord Stanley. The series went the distance; the Canucks found themselves facing a 3-1 deficit early, but scratched and crawled their way back to a decisive game 7 in New York. Ultimately they fell one goal short by losing 3-2 and having to witness the Rangers celebrate in jubilation while the Canucks went home heartbroken and defeated. That win signalled the end of the Rangers Stanley Cup drought of 54 years. Meanwhile, the Canucks are currently tied in second with a 47 year drought and having not won since they became a franchise. In a meaningless regular season game with both teams having their seasons “ended” weeks ago, the Canucks pulled off a 4-1 victory against the Rangers on the 25th anniversary of the 1994 Stanley Cup Finals.

The Aftermath of the 1994 Stanley Cup Finals

25 seasons have passed since the New York Rangers, led by captain (and future Canuck) Mark Messier, broke the hearts of the Canucks faithful. Both teams have managed to make it back to hockey’s biggest stage since ‘94— New York in 2013-14 against the L.A. Kings and Vancouver in 2010-11 against the Boston Bruins. Neither club was able to win once they reached the finals. The Rangers proceeded to make the playoffs in each of their following three seasons after 1994, but the furthest they would get was to the Conference Finals. The Canucks were never able to recapture the team magic that led that improbable run, failing to make it out of the second for the next 16 seasons. The team’s then superstar, Pavel Bure, would eventually move on to Florida and win back-to-back Rocket Richard trophies at the league’s leading goal scorer in 1999 and 2000. Pat Quinn, head coach and local legend in the city of Vancouver, moved on to Toronto a couple seasons after 1994. Ironically enough, Vancouver would bring Messier into town at the age of 37 and promptly give him captaincy over the team and in the process removing Trevor Linden, who was the heart and soul of that Canucks squad. What made that team so special was the leadership qualities Linden possessed, the superstar prowess of Bure, and the team orchestrated under Pat Quinn who knew how to do more with less. Within just a few seasons, that core was gone and a new regime was in place. The “Messier era” in Vancouver is held in the same light as their brief basketball team, the Vancouver Grizzlies. It was immensely disappointing. The team failed to accomplish anything under the Messier regime and he would eventually return to the Rangers in 2000.

The first period of Wednesday night’s contest showcased two teams looking to put their losing slumps behind them. Vancouver entered the contest losers in five of their last six games, while the New York Rangers limped into Wednesday’s game losers in seven of eight. Despite lackluster play by both teams of late, exciting action with swift pace dominated the opening 20 minutes of play, though neither team had their efforts rewarded on the scoreboard. It was anyone’s game when play resumed in the second. No goals were being put up and quality chances were split between both clubs. That changed at the 4:23 mark when Rangers forward Chris Kreider went in to forecheck in the Vancouver zone but wildly threw his elbow out and connected with the Canucks rookie sensation, Elias Pettersson. It was a dirty play made by a player that has a history with controversial hits. His elbow connected with Pettersson’s head, and Kreider was given 5 minutes and a game misconduct for his actions. Pettersson was taken to the locker room in what was assumed to be concussion protocol.

Vancouver’s PP, which has been dreadful to say the least all season, had five minutes of play to try and score the game’s first goal. They did just that when Josh Leivo set up Brock Boeser for a one-timed wrist shot after hitting him with a no-look pass. Boeser made no mistake as he beat Henrik Lundqvist glove-high for his 23rd goal of the season. As soon as the powerplay expired, Alex Edler completed a beautiful cross-ice path perfectly in stride to Tyler Motte on a partial breakaway and he would take advantage of an overly aggressive move by Lundqvist and backhand his first goal in his last 18 games. Motte would not have to wait long in between goals this time around. After a power move off the boards in which Canucks forward Antoine Roussel took the puck straight to the net, Motte would follow up the ensuing rebound and slapshot home his 2nd goal in 11 seconds. The goal came at a cost however; Roussel took a nasty hit from Brendan Lemieux during the play. After taking a shot near the head, he went straight to the ice in an awkward manner with his knee buckling during the fall. The result of the play was another five minute major for the Rangers with Lemieux heading to the box and the Rangers serving half the second period in the penalty box.

After a debilitating second period for New York, they managed to capitalize on the Power Play after one of Vancouver’s best penalty killers, Alex Edler, got called for interference. In the process, they disrupted Jacob Markstrom’s shutout, who had a nice bounce back game after getting the boot against Vegas in the first period after giving up five goals on 16 shots. Vancouver looks to keep on the offensive as they face the New Jersey Devils on Friday, concluding their 3-game home stand.