Canucks Stifled Against Vegas for the Second Time in a Week 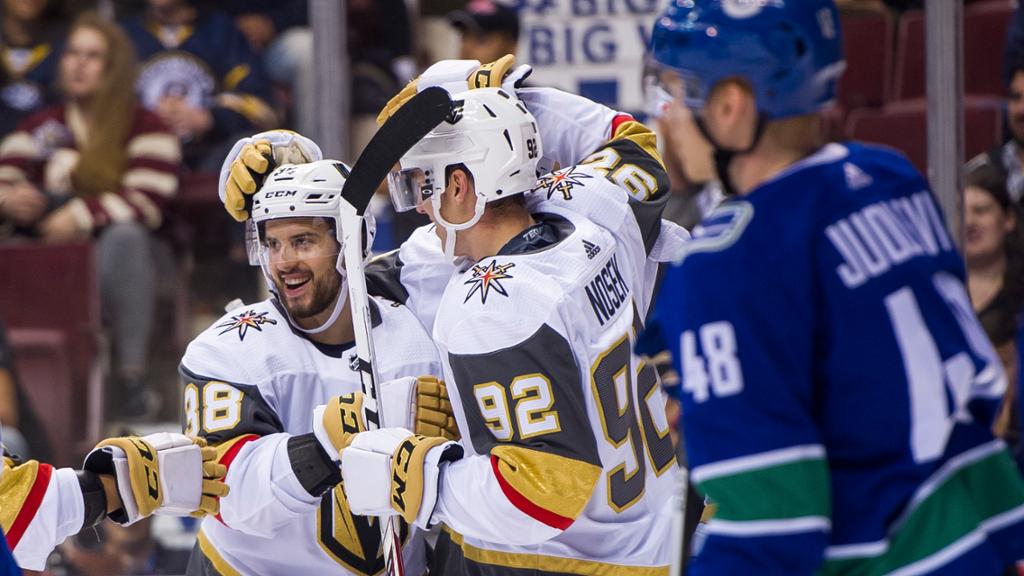 “The definition of insanity is doing the same thing over and over again and expecting different results” is a quote made famous by one of the world’s greatest intellectuals, Albert Einstein. It is also a quote the Vancouver Canucks should attach to their social media pages; as once again on Saturday night, against the same team that thoroughly outplayed them six days prior, they failed to put forth any effort early and the Golden Knights capitalized. Vegas picked up where they left off last time the two teams met last Sunday, a game in which they put up 48 shots and 3 goals, by putting up 5 goals in the first and sailing to an easy victory, 6-2.

Jacob Markstrom’s Run of Dominance Comes to an End

Jacob Markstrom’s game has been reconstructed by the Vancouver Canucks goaltending coach, Ian Clark. Being a relatively average netminder in the NHL throughout the first eight years of his career, Markstrom’s revamped playstyle under Clark has elevated him into the discussion amongst the league’s elite. His play throughout the month of February was astonishing, putting up a .930 SV % while frequently seeing shot totals against him in the mid-thirties. Unfortunately for the Canucks, this could not translate into the win column, as even though their netminder has been reminiscent of a 1998 Dominik Hasek, the team went 4-5-3 in games Markstrom played in February.

He was the main reason, in fact the only reason, why you can say a 3-0 loss against this same Vegas team last Sunday was kept respectable. He was under siege the entire contest, while still saving 45/48 shots against him and turning away high quality scoring chances throughout the night. His defense did not do him any favors.

Saturday in the team’s rematch was no different. Before the Canucks could even muster a second shot on net, they were down 2-0. The Golden Knights were attacking the net and getting bodies in front of Markstrom with little contest from the Canucks defense. At the 14:17 mark of the first period, Vegas C Paul Stastny walked around a flat-footed Canucks D Alex Edler into the open slot and put a fifth goal past the Canucks netminder. That was the final shot Jacob Markstrom faced, being pulled for the first time this season after allowing 5 goals on 16 shots. The Canucks would play a more spirited affair once backup Thatcher Demko was subbed into the game, but by then the damage was already done. Failing to get off to a good start to the hockey game as they so often have done this season, they let their goaltender who has been their saving grace hung out to dry.

If you watched this team play at any point during this season, you know that offensively they are carried by three players. That is a lot to ask of a primary scoring source, and it is even more to ask of a trio consisting of a 23-year-old, 22-year-old, and a rookie 20-year-old. The team is currently one of the league’s worst at putting the puck in the net— tied for 26th out of 31 teams with 187 goals through 69 games. Of those 187 goals, 72 of them have been scored by Brock Boeser, Elias Pettersson, or Bo Horvat. 39% of the Canuck’s goals have been accounted for by that trio. Against Vegas on Saturday, the two goals scored by Vancouver were off the stick of Brock Boeser and Bo Horvat. The only Canucks forwards with more than 17 minutes of ice-time were, hold on, you are not going to believe this….. Boeser, Pettersson, and Horvat.

What’s even worse is that the second line of Vegas accounted for several points in the opening period alone. The kids have played a grueling, tumultuous season where the weight of the team’s offense has been placed on their shoulders. Bo Horvat has been the leagues busiest centre. Nobody has taken more faceoffs than him and seemingly every game he has a new line of wingers to try and create some chemistry with before the lines change again the following game.  This has been a problem plaguing the Canucks throughout the entire season and in this offseason it should be prioritized along with their shotty defensive core.

The Debut of Quinn Hughes and Moving Forward

Though this article was filled with pessimism, there is something to be very excited about if you are a frustrated Canucks fan. Last year’s 7th overall pick, Quinn Hughes, will be making his much anticipated debut in the upcoming games. With a blue line that is, well to be subtle, terrible, Hughes brings promise to a core that has been underwhelming. So far this season for the University of Michigan, he has recorded 33 points in 32 games and it should be exciting to see how the young man’s game translates over to the big leagues! The Canucks look to turn things around at home this Wednesday when they host the New York Rangers.