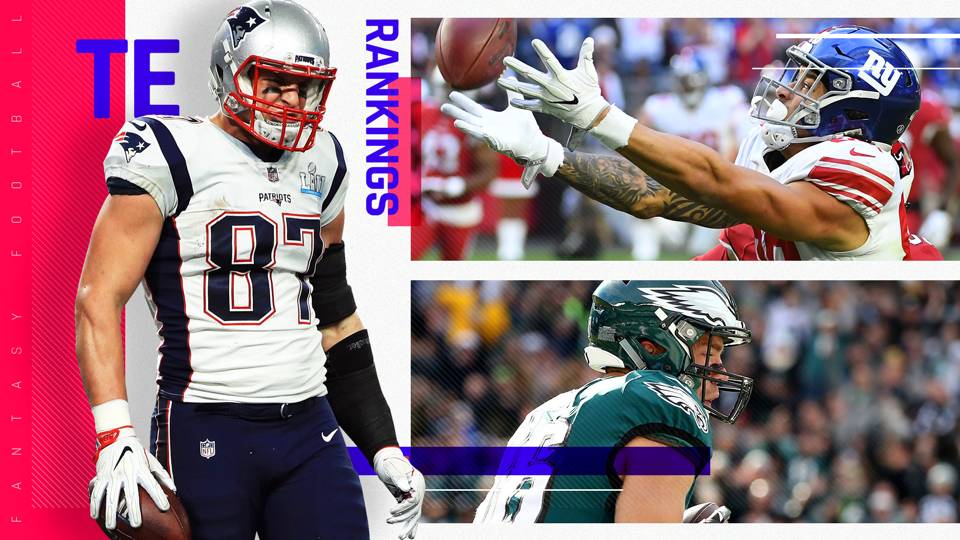 At number one is the most dominant tight end in the NFL. That player is the Kansas City Chiefs tight end Travis Kelce, who is in a prime spot to repeat his TE1 finish from last year. It is hard not to consistently put up TE1 numbers when you are a main piece of a high powered Chiefs offense, and it is even easier when you are Patrick Mahomes’ favorite red zone target. Netting 139 targets and 26 of those in the red zone, there is no question that Kelce gets the volume he needs to provide fulfillment for his fantasy owners. Along with the double digit touchdowns comes the big play ability that brings excitement and another component to his fantasy game that most other tight ends don’t have. In 2018, Kelce had 5 games with over 100 yards and 2 receptions of 40 plus yards. Needless to say, Kelce is in line to repeat as the TE1 in 2019, and I will be nothing less than happy if he falls onto my roster. Coming in at number 2 is the Philadelphia Eagles tight end, Zach Ertz. With similar stats to Kelce, like 5 100 yard games and 27 red zone targets, Ertz sticks out in one part of his game and that is the number of targets he received. Ertz had 154 targets last season, which was 15 more than Kelce and 26 more than the next tight end. Targets are never the question for Ertz, as the Eagles lack weapons outside of Ertz and Alshon Jeffery. With Foles out the door and Wentz stepping in as the full-time starting quarterback, Ertz looks like a lock to repeat as the target leader at the tight end position, which should guarantee him a top 3 finish yet again. After an enormous breakout season by this Iowa alumnus, it seems only fitting for George Kittle to be in my top 3 at the tight end position. Despite having lackluster quarterbacks throughout the whole season, Kittle was still able to record 4 games with 100 plus yards and 6 catches of 40 yards or more. With the anticipated return of QB Jimmy Garoppollo and a full offseason to gain chemistry, Kittle is a lock for top 3 and may even have the tools necessary to pass Ertz for TE2. It will be exciting to see if Kittle can continue his breakout chunk of his career and continue his fantasy dominance.

Now, if you have played fantasy before, and especially last year, you will understand where I am coming from when I discuss the struggle that comes with finding a tight end outside of these top 3. These next 7 tight ends all have the potential to be interchangeable when it comes to finishes inside the top 10, but these next 7 were ranked based on the potential they bring to the table. Coming off a very unexpected season last year with 13 touchdowns, expect Ebron to fall back down to reality for the 2019 season. With the return of Jack Doyle and the high probability that the Colts add more offensive weapons in the draft/free agency, Ebron will not be able to repeat his unreal touchdown performance from the 2019 fantasy season. It is hard to predict how the Colts will use Ebron next year when Doyle returns, but Ebron still should be good for 7-9 touchdowns, which should net him a spot in the top 5. Howard has possibly the highest ceiling of all TEs outside of Kelce, Ertz, and Kittle. Howard was able to score 5 touchdowns on 7 red zone targets despite playing only 10 games and splitting time with Cameron Brate. With the most likely departure of Cameron Brate and a solidified starting QB, Howard has the chance to mold into the 3rd option on offense right behind Mike Evans and Chris Godwin. If you find yourself in the middle rounds of your draft next year and you missed on one of the top tight ends, you may want to take a look at Howard. Howard can provide you with top 3 upside, and as an added bonus he is in a super pass heavy offense that will most likely be losing in the majority of their games, which will force them to pass the ball more. Needless to say this one is a hot take and McDonald could easily not finish in the top 10, but it seems as if the opportunity is lining up for McDonald to breakout in the 2019 season. As discussed in my sleepers video/article, I highlighted that McDonald has the opportunity to breakout this season for a couple reasons. The most important reason is the departure of his partner in crime Jesse James via free agency. Last season, McDonald only received 57.1% of the snaps, which is not the snap share you need in order to be a solid fantasy tight end, but that being said Vance was still able to finish as the TE10 due to his big play ability. Speaking of big play ability, the Steelers are going to be in need of that with the departure of Antonio Brown. McDonald will be able to fill some of the big play void left by Brown and James, as well as Brown’s touchdown production. McDonald should be in line to finish top 10 again, but draft him with a backup plan. Coming off a heartbreaking missed season due to injury, Hunter Henry will be looking to come back in full force for the 2019 season. If Henry can remain healthy, he will be a huge asset in the fantasy football world. It is hard to determine what Henry can do in terms of fantasy production as he only played 12 games in 2017 and 13 in 2016, but we do know for certain that he is in a high powered offense with a superb quarterback. As long as he stays healthy, Henry will be able to find most of his fantasy production in the red zone for the Chargers. Especially with the departure of wide receiver Tyrell Williams, who was a huge big play/touchdown asset for the Chargers. Just like Ebron, it may seem “safe” to draft a guy like Henry who has shown promise, but no one knows for sure what his production will be like for the 2019 season. David Njoku seems to be in the same position as O.J. Howard for the 2019 season. Njoku is in an up-and-coming high-powered offense, but the main problem is that he is not the number 1 or 2 target and he probably will not be any time soon. With his lackluster stats and big play ability, it is hard to predict what his usage and production will be for the 2019 season, but due to the Browns’ offense and Njoku’s tall and athletic frame, he will be able to provide most of his fantasy production in the red zone. Yes, I know that he might retire and that he had an awful year last year; but it is still Gronk and he will still be the number 2 target behind Edelman as long as Brady remains under center. The biggest component in having Gronk at number 9 is the usage Gronk received in the playoffs last year. Gronk, when healthy, is a beast in terms of fantasy production, and in a high powered offense he deserves to be my TE9. Don’t necessarily draft Gronk to be your TE1; but with his super low ADP, he is worth the risk if you are able to get a top tight end in the earlier rounds. Gronk should be one of many late-round targets in drafts this year. He brings enormous upside as long as he doesn’t retire. Another O.J. Howard and Njoku prototype player with the same upside scenario for the 2019 season is Evan Engram. Engram had a tremendous rookie season and was looking to repeat that production for the 2018 season, but that was shut down when the Giants developed their offense around Saquon Barkley. It will be hard for Engram to become a consistent fantasy tight end with a player like that in the backfield, but Engram still has the upside to bring in double digit touchdowns next year. He only played in 11 games last year, and when he did play he was the number 3 option behind Barkley and OBJ. The Giants offense will continue to improve and fantasy owners can only hope that Engram improves with them. Engram should be a low end TE1 for the 2019 season.

That wraps up my positional top 10 rankings for the 2019 season. As the free agency period starts on Wednesday, I will be focusing mainly on all of the signings and the fantasy implications that come with them. Subscribe to my podcast on apple podcasts Top Tier Sports or my YouTube channel. The fantasy season is upon us ladies and gentleman!