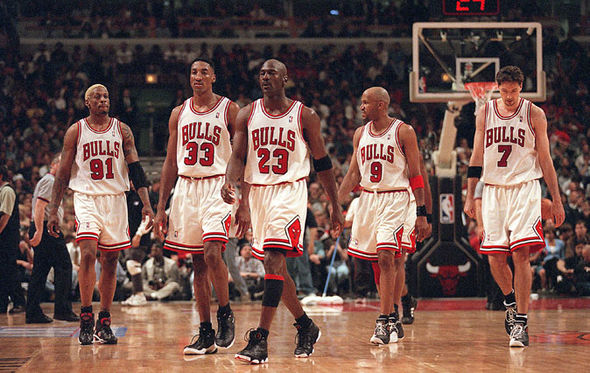 Michael Jordan’s Chicago Bulls won six championships in the 90s. Two separate three-peats in 1991, 1992, 1993 and 1996, 1997, and 1998. The Bulls were coached by Phil Jackson, who has 11 championship rings as a coach. Michael Jordan and Scottie Pippen led the Bulls, who had a ton of good role players in both three-peats with players like Horace Grant, B.J. Armstrong, John Paxson, Dennis Rodman, Ron Harper, and Toni Kukoc. Along the way to those championships, the Bulls beat some championship-worthy teams. These are those teams: The Cavs had an excellent championship window in the late 80s and early 90s. But unfortunately for them, they faced the Bulls four times in six years during that time frame. Cleveland was led by point guard Mark Price and All-Stars Larry Nance and Brad Daugherty. They were as good bigs as you could find back in those days.

Cleveland had a strong enough team to beat the Bulls on paper, but the Bulls had Michael Jordan. In the 1988 playoffs, Jordan lit the Cavs up for 50 and 55 points in the first two games of the series. Then in 1989, Jordan hit his famous buzzer beater to send the Cavs home again.

In 1992 and 1993, it was more of the same for the Cavs: too much Michael Jordan. I’m sure Mark Price and company have nightmares about Michael Jordan. The Knicks, led by Patrick Ewing and coached by Pat Riley, were a tough, hard-nosed team. The Knicks played the Bulls tough with their physical play. In 1992, the Knicks forced the Bulls to a Game 7, but Michael Jordan was too much for them, scoring 42 points in a 110-81 annihilation in Game 7.

The Knicks best chance to beat Jordan was in 1993. That year, the Knicks were 60-22 and had home court advantage. The Knicks took the first two games with Ewing averaging 25 points per game and Charles Oakley’s physical play in the interior. But again, too much Jordan. The Bulls went on to win the next four games.

The Knicks and Bulls had many battles, but the Knicks always came out on the short end of the stick. Charles Barkley and the Suns played the Bulls in the 1993 NBA finals. In that season, the Suns won 62 games and Barkley averaged 25.6 points, 12.2 rebounds, and 5.1 assist per game en route to his only NBA MVP award.

In The Finals, Michael Jordan was great, averaging 41.0 points, the highest average in Finals history. He added a 55 point performance in game 4. The 1996 Miami Heat team was an outstanding team. They were coached by Pat Riley, with players like Tim Hardaway, Alonzo Mourning, Jamal Mashburn, Dan Majerle, and P.J Brown. In this season, the Heat won 61 games, and Tim Hardaway finished fourth in MVP voting. Even with all that, the Bulls beat the Heat in four games.

Jordan averaged 30 points per game in the series against the Heat. He also grabbed eight rebounds per game. The 1998 Indiana Pacers had the best chance of any team to knock off the Bulls.They were coached by Larry Bird, and Reggie Miller was at the top of his game. The team added former All-Star Chris Mullin, who was at the end of his career but still useful.

Also, they had Mark Jackson running the point and the Davis boys, Antonio and Dale, playing physically in the paint. Rik Smits was another key cog in the middle for the Pacers.

The Pacers took the Bulls to Game 7 after Reggie Miller hit a game-winning shot in Game 6. The Pacers got out to a decent lead in Game 7, but Jordan and the Bulls found their way back. Jordan did not shoot well in the game, going 9-25, but did all the little things to help the Bulls pull out the win. The Utah Jazz faced the Bulls in back to back Finals in 1997 and 1998. Karl Malone and John Stockton led them. In 1997, the series was tied at two games apiece. That led up to the crucial game five, which is known as the classic flu game. Michael Jordan had the stomach flu and still scored 38 points to led his team to victory. That year, the Bulls defeated the Jazz in six games with a game-winning shot from Steve Kerr.

In 1998, the Jazz had another shot at the Bulls. The Bull were banged up with Scottie Pippen aggravating a back injury. Pippen continued to play, but it was obvious he was hurt. It didn’t matter though as Jordan took over and hit the game-winning shot over Bryon Russell. Jordan had 45 points in the game, which was over half of the Bulls’ 87 total points for the game. That was the end of the Bulls dynasty after getting six championships in eight years. They arguably could have won 8 in a row if Jordan did not retire between the three-peats.

These are the best teams Jordan’s Bulls beat during their historic run, but there were some other teams the Bulls also beat that were pretty good. The 1992 Portland Trail Blazers, 1991 Los Angeles Lakers, and 1996 Seattle Supersonics were all outstanding teams. Another team that was solid too was the Atlanta Hawks of the late 90s with Dikembe Mutombo, Mookie Blaylock, and Steve Smith.