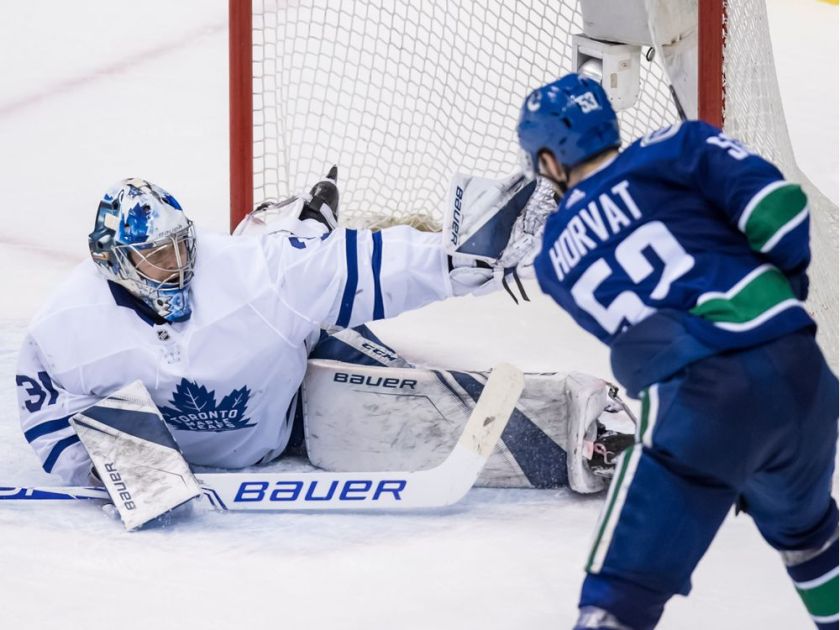 The Vancouver Canucks, fresh off the heels of an embarrassing road loss in Vegas on Sunday, reversed their fortunes against a premier team in the NHL Wednesday night by defeating the Toronto Maple Leafs 3-2. Getting off to a hot start in the opening frame, and bouncing back after a second period that showed the Maple Leafs strike twice in 34 seconds, the Canucks would use a third period rally to hand Toronto their first loss when leading after two periods this season.

In a season that has been disheartening for the Canucks, they played especially poor last Sunday in their afternoon game against Vegas. Head coach Travis Green had this to say about their efforts, “I’m disappointed in our game tonight. I know who our team is. I don’t say that a lot, but tonight we were bad, and were going to have to be better.” For a coach that is relatively soft spoken, and does not publicize his concerns with his team’s play, this was a big deal. How the Canucks would answer against the Toronto Maple Leafs and their high octane offense would demonstrate their resilience for the remainder of the season. Coach Green switched the lines up, not a uncommon move for a team struggling to find rhythm. With the changes in the lineup, they would open the first period of play with a high pace, and even outplay the Maple Leafs, who are adept at playing fast with the talented young core they have. Outshooting the Maple Leafs 15-8 in the first, as opposed to being outshot by Vegas 16-6, they would test Maple Leaf netminder Frederik Andersen early and often. Andersen came into tonight’s contest a winner of 5 in a row while bolstering impressive stats of a .932 SV% and a 2.40 GAA during that stretch. His strong level of play would continue during the first period, keeping the Canucks at bay with the opening frame resulting in a 0-0 tie.

After exhilarating back-and-forth action in the first period that showcased both goaltenders playing at their best—and the young, exciting talent on both ends of the rink playing at a pace that favors the fans—the Maple Leafs demonstrated why they are so feared by the league in the second. Neutralizing the Canucks for the majority of the second, the Maple Leafs would blitzkrieg the Canucks for two goals in rapid succession. The first goal of the game came via special teams; Maple Leafs’ star forward, Mitch Marner, stole a bouncing puck from the possession of Markus Granlund and lead a break 2 on 1 going the other way. Taking his time and controlling the bouncing puck, he would suck Canuck D-man Troy Stecher in and feed the puck to Leafs D-man Ron Hainsey to put into the open cage. Before the Canucks’ announcers could finish saying who scored the opening goal, Morgan Rielly—who was born in Vancouver—would score against his hometown team off a pass set up by John Tavares to make it 2-0.

That is the terrifying aspect of this hockey club; they have talent far into the depth chart and are capable of putting goals up in a hurry. Though they did not find a way to score in the 2nd period, the Canucks were able to account for the last great scoring chance of the frame. Brock Boeser, who has been in a scoring drought as of late and not necessarily known for his playmaking abilities, would set up Bo Horvat down in front for a wonderful opportunity, but the glove of Andersen robbed him of what appeared to be a sure goal.

Vancouver found themselves in a familiar situation. No team in the league has been shutout as much as they have, and once again through two periods of play they saw a goose egg on the scoreboard. Making matters worse, no team in the league is better than the Toronto Maple Leafs at securing a victory after leading through two. With their backs up against the wall, Vancouver would rekindle some of that energy they had in the 1st period and finally break through. Loui Eriksson would find the back of the net after taking a pass from Adam Gaudette, and using Leafs defenders as a screen, he would backhand one past Andersen. Reinvigorated with new life, the Canucks were met with some good fortune as Toronto got caught with too many men on the ice. In similar manner to what Toronto did in the second period, Josh Leivo would capitalize against Toronto’s over-aggressive penalty kill and score Vancouver’s second goal of the game to tie the game up.

It was only fitting that these two teams that played an electric game filled with pace and close moments would decide the winner in a sudden death 3-on-3 overtime period. Alexander Edler, the longest tenured member of the roster, would receive a cross-ice pass from Brock Boeser and wrist home the OT winner to complete the comeback against Toronto. The Vancouver Canucks gutted this victory out. After coming close in the first and leaving empty and having the momentum shift sides in the second, they responded with an amazing comeback win against a team that does not give up late game leads. The Canucks now need to keep the momentum going against the Oilers on Thursday night in Edmonton.