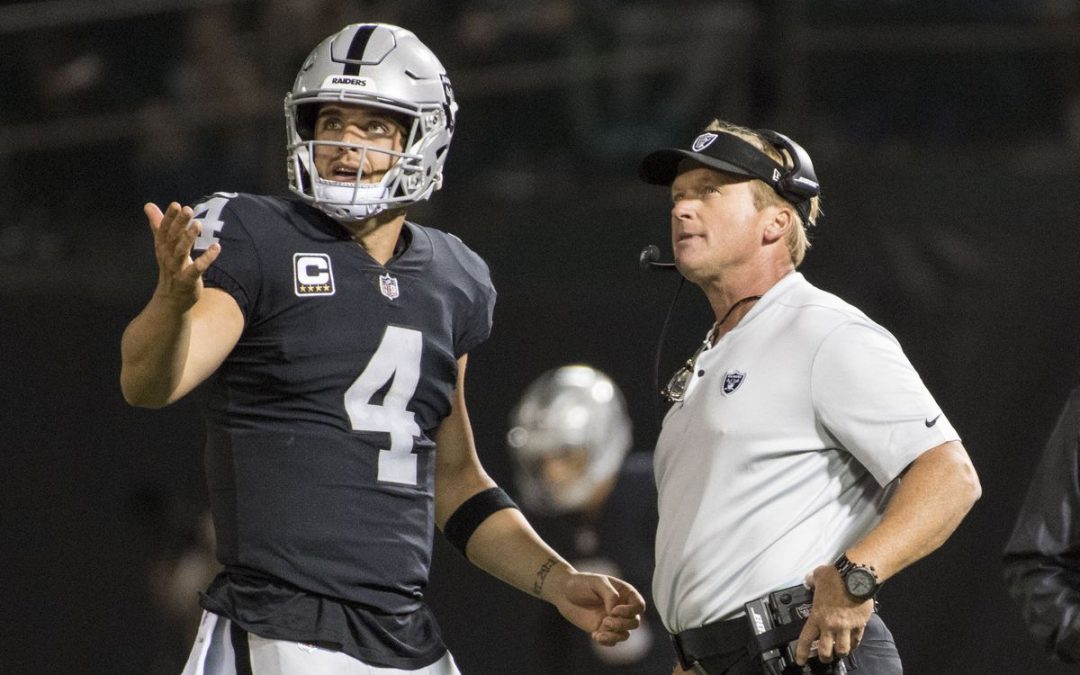 If you don’t know by now, Jon Gruden runs the show in Oakland. Khalil Mack was traded for draft capital, Amari Cooper was traded for draft capital, and now the only question is what to do with those picks. Draft picks are essential at any round and any spot in the draft, especially first-round draft picks. Not only that, but when they’re acquired by trading your top player on offense (Amari Cooper) and your top player on defense (Khalil Mack)–who is also arguably a top 5 player in the league–you better nail the draft. So, the Raiders are now left with three first round draft picks (4, 24, and 27). With them absolutely needing to hit on these picks, what guy is better to bring in other than the draft guru himself, Mike Mayock? On New Year’s Eve, the Raiders made the best decision they have ever made in recent years by hiring Mike Mayock (formerly of NFL Network) to be their next general manager.

The Raiders now have a ton of picks and a ton of cap space. In fact, they have roughly $71 million for 2019 and $124 million for 2020. There has been speculation that the team will go after Le’Veon Bell. If I’m Jon Gruden, I’m absolutely pulling the trigger on Bell. Bell wants more than $17 million per year, and that’s a tough task to get done, but the Raiders have absolutely nothing to lose. Bell wants to be paid as a number one running back and a number two receiver. The Raiders traded their two best talents and they need to do something. Bell would be a great weapon for Derek Carr out of the backfield.

Now the Raiders may not be totally connected to Bell, but they’re certainly connected to Antonio Brown. There were reports just this week about the Raiders willing to give up their 24th overall pick for Brown. Normally, I would advocate for not doing this considering everything Brown has been involved in this off-season from the speeding ticket, to how he handles himself with the media, to the potential domestic violence case or case-to-be. And while he may look bad in the public eye, the Raiders need to do something after trading away Amari Cooper. Why not replace Cooper with Brown?

NUMBER 4 OVERALL: EDGE RUSHER Josh Allen from Kentucky- With the 4th overall pick, the Raiders should absolutely address the loss of Khalil Mack. Draft Josh Allen and while he may not be Khalil Mack, you’re getting a great talent with a lot of speed off the edge.

NIMBER 27 OVERALL: SPEEDY WIDE RECEIVER Marquise “Hollywood” Brown from Oklahoma- That Brown last name is interesting, right? That’s because Marquise Brown is Antonio Brown’s cousin. If you had any worry that AB would be a bad teammate in Oakland, why not bring in his cousin and address a lack of speed at the wide receiver position. A lot of mock drafts have Marquise Brown going 15th overall to the Redskins, but if he falls to the Raiders, they need to pounce on him. Ideally, they should consider even trading up from 27 to get him.

Yes, I think hiring Mike Mayock was great for the organization. Gruden knows he needs to nail this draft, so he brought in all the fire power possible. Mayock will ultimately be the judge of if the Raiders should draft Amari Cooper’s replacement or trade for his replacement (AB), or both. Derek Carr may not be a great quarterback, but look at the weapons he had. He lost Amari Cooper and the Raiders didn’t have a running game whatsoever. He virtually turned Jared Cook’s career around and made him a top 7 tight-end. Give Carr Le’Veon Bell, Antonio Brown, and Marquise Brown and the Raiders can turn this ship around and become contenders again. Gruden, you’re on the clock… are you up for the task?