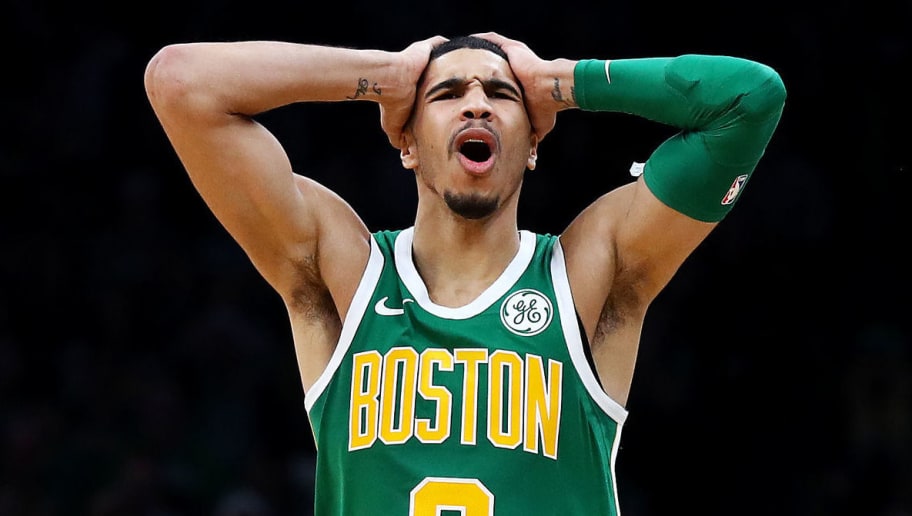 Turmoil has struck the most decorated franchise in NBA history, the Boston Celtics. Shockingly, it is not always sunny skies in the city of Titletown, U.S.A— the moniker handed to Boston after the recent successes they have enjoyed in major North American sports. The city has been forced to endure what has seemed like an insufferable drought of 25 days since they last won a championship; and fans are frustrated over the direction of their basketball team, the Boston Celtics. However, let us not dive into the team’s shortcomings as of late, but focus on one player in particular, Jayson Tatum.

Jayson Tatum had an up-and-down rookie campaign, showing tremendous upside with his athleticism and ability to shoot the three ball while fighting frustration when he hit the notorious “rookie wall.” Tatum was able to surpass obstacles hurled at him and really arrived on the scene come playoff time when his team was missing their two superstars, Kyrie Irving and Gordon Hayward. Tatum and the Celtics ended up making it all the way to the Eastern Conference Finals, doing battle with the King and taking him to the brink of elimination. He showcased talent and poise well beyond his years and put fans in pandemonium over how great he could one day be.

Now, let us transition to now, 8 months after last year’s playoffs, where a fully healthy Boston Celtics squad, who was favored to take the East, currently finds themselves with an underwhelming record of 37-25 and sitting 5th in their conference. Fingers have been pointed at Kyrie Irving, the team’s superstar point guard, by mainstream media. They have questioned his loyalty, as the basketball world is unaware of which team he will play for next season. The Celtics coach, Brad Stevens, has been under fire due to his lack of finding a steady rotation that works for a team filled with depth. Making matters worse is the fact that Gordon Hayward has failed to come back to form. While all of those are reasonable answers to why the Celtics find themselves here, what is really concerning is what has transpired with Jayson Tatum and his overall role within the offense.

Jayson Tatum is going to be a fantastic basketball player, he just is not there yet. He has shown glimpses of playing at an elite level defensively, but does not do so consistently and his passing ability leaves way too much to be desired. His lack of aggression offensively and recent body language has been alarming. His shot chart has been thoroughly confusing for a man of absurd athleticism at the age of 20. Instead of attacking the basket and looking to get his shots, he has adopted the game of a 35 year old Kobe Bryant.

Ironically, it was Kobe who worked out with him last offseason to aid the progression of his game. Mastering where to position himself and breaking down defenders, Bryant was able to be effective well into his thirties. Acknowledging one of the greatest scorers of all-time and seeking his guidance is honorable, but the problem lies with age. Kobe Bryant, much like Michael Jordan, honed one of the best post up games we have seen from a guard when his speed and overall athleticism began to deteriorate. Looking like he has been trying to skip over multiple steps, Tatum has expedited the developmental stage and gone straight to his thirties. More often than not, this season we have seen him settle for a suspect mid range jumper or look to essentially be a spot up shooter. The frustrating part of Jayson Tatum settling is that when he is looking to attack the hoop and be aggressive, he is at his best. Unfortunately, now he appears conflicted with the advice he received from Kobe and frequently fails to get more than a dozen shots up. On top of that, his lack of aggression garnishes no love from the charity stripe.

Looking at his body language recently, this situation appears less than ideal for Tatum. Danny Ainge, the Celtics GM, has made it abundantly clear that nobody is off the table when it comes to pursuing Anthony Davis. Because of this, I truly believe Tatum feels betrayed, much like the Lakers core who are experiencing the same sorrow. It would be a shame to see a change of landscape for the young Tatum so early into his NBA career, but the idea of developing at his own rate and not stressing over drama in his locker room could be appealing.

If anyone can figure this out, it’s be the Boston Celtics and Brad Stevens. Time is no longer on their side however; and now with 20 games remaining, we are going to see if they unite in hopes of winning a championship, or fold and leave their once bright future up in the air.