Should High School Seniors be Able to Make the Jump to the NBA? 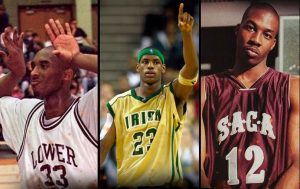 With the recent news that NBA Commissioner Adam Silver has submitted a proposal to lower the age to enter the draft from 19 to 18, the college basketball world has been shaken to its core. But is this the right thing to do? Should this be allowed? Are the kids ready for this big jump to the professional level? All these questions are fair and have merit to them. If this new rule should pass, it is expected to take effect in the 2022 draft. We have seen high school players jump to the NBA before, and we have seen some remarkable players stem from that jump. In all fairness, we have seen some players not pan out and in retrospect probably should have gone to college to work on their fundamentals before making the huge jump.

After the 2005 draft the NBA implemented what is known as the “one and done” rule, which means you must spend at least one year in college before you can be eligible for the NBA draft. There have been murmurs of this rule getting changed throughout the years, but on February 20th, 2019, the world stopped when future number 1 pick Zion Williamson blew through his shoe and sprained his knee. This got the whole NBA community talking and discussing changing the rule. Jayson Tatum was quoted as saying, “I think this is a good idea. If you’re good enough to come out of high school, I feel like you should be able to.” Another prominent NBA player, DeMarcus Cousins, was adamant in saying he doesn’t see the difference between 17 and 18 or 18 and 19. He said players will be immature when they come into the league and they’re going to be ignorant.

When all is said and done, and the dust finally settles, this rule should pass; and the kids should be able to make the jump. The main reason behind this is we now have the G league, which has now become a haven for young players to hone their craft and really figure out what kind of player they are ultimately going to become.

You don’t have to agree with me. Just look at the evidence and make the decision for yourself.