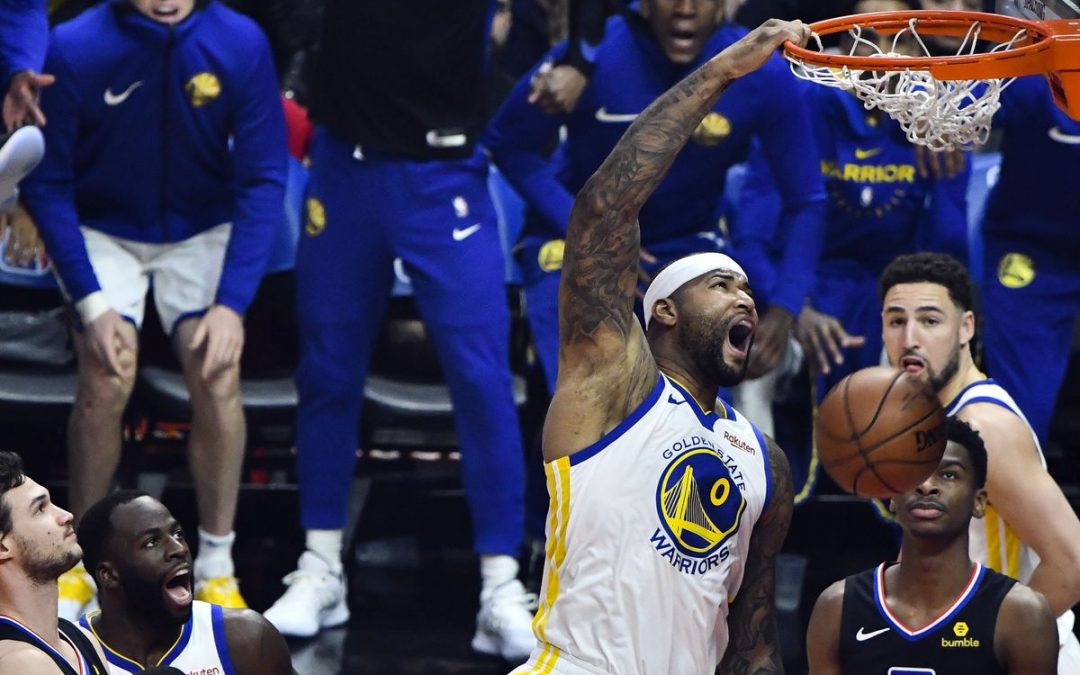 In the latest case of NBA over-analysis, every commentator that is watching the Warriors play nowadays is shouting their particular advice at the television screen. In the case of DeMarcus Cousins, all of their pointers seem to focus around Cousins defending the pick-and-roll, sensing that perhaps this is the integral weakness in the mighty armor of the three-peat seeking Warriors. Given the seriousness of the injury that Cousins suffered, as well as the play that Cousins has shown thus far, I would say that calling Cousins a liability is probably overstating the case at this particular point.

Cousins is clearly frustrated in his current predicament for a few significant reasons. The first is his minute restriction, which is certainly frustrating for a player of his caliber. But he is trending upwards and will be taking on a bigger role as we approach the playoffs. The second is that he does not often see the floor at the end of the game, which is likely the moment when he feels he can do the most. This is mostly a coaching decision for Kerr, and it stems from him having more trust in the starting 5 that he is “used to.” This part is difficult because Steve Kerr seems to be aiming for Boogie to have more of a secondary role at this point, whereas he has been a primary playmaker up until this point in his career. Therefore, suggesting that he take a step back at this point is wise, but not necessarily realistic.

The last reason is probably the one that gets the least amount of run in discussions about DeMarcus Cousins since his injury: he has not been efficient enough in shooting and scoring the basketball. He is not shooting particularly well from the outside or from the field, and he looks to be passing up matchups that he would normally take advantage of on the offensive end. Of course, he can improve here at his own pace, as getting into a shooting rhythm is difficult for anyone inserted into a lineup mid-year. He has struggled to finish at the rim, which is uncharacteristic of DeMarcus. A simple comparison of some of the game tape from this year to his prior years shows that the problem for him is primarily offensive at this juncture.

Of course, Cousins looks to be a liability defensively because of his lack of speed and his reluctance to jump into certain situations at the rim. I would say this is a case of Cousins being defensively apprehensive more so than it is a sign of his injury making him a point of weakness on the Warriors. He has been blocking shots, causing turnovers, and making solid outlet passes at his normal rate, but his injury has made him cautious about trying too hard on every single defensive possession. Add in his foul trouble in nearly every game and you have a perfect storm of factors that has caused the commentators to want to attack the interior every time Cousins is out there.

Forcing a big man to guard the pick-and-roll is a good strategy when he cannot defend it the way he normally would since he is afraid of fouling out. Extrapolating that into a strategy that an opposing team should use for the entire game is probably a step too far. Going even further with that idea and saying that this is the largest weakness that the Warriors have is a gross exaggeration, given the fact that they have not been a lockdown team when it comes to interior defense against solid centers. Suggesting (like many have) that DeMarcus Cousins is a liability that will ultimately cause the downfall of the Warriors dynasty is just plain crazy.