Why the Lakers Will Not Make the Playoffs 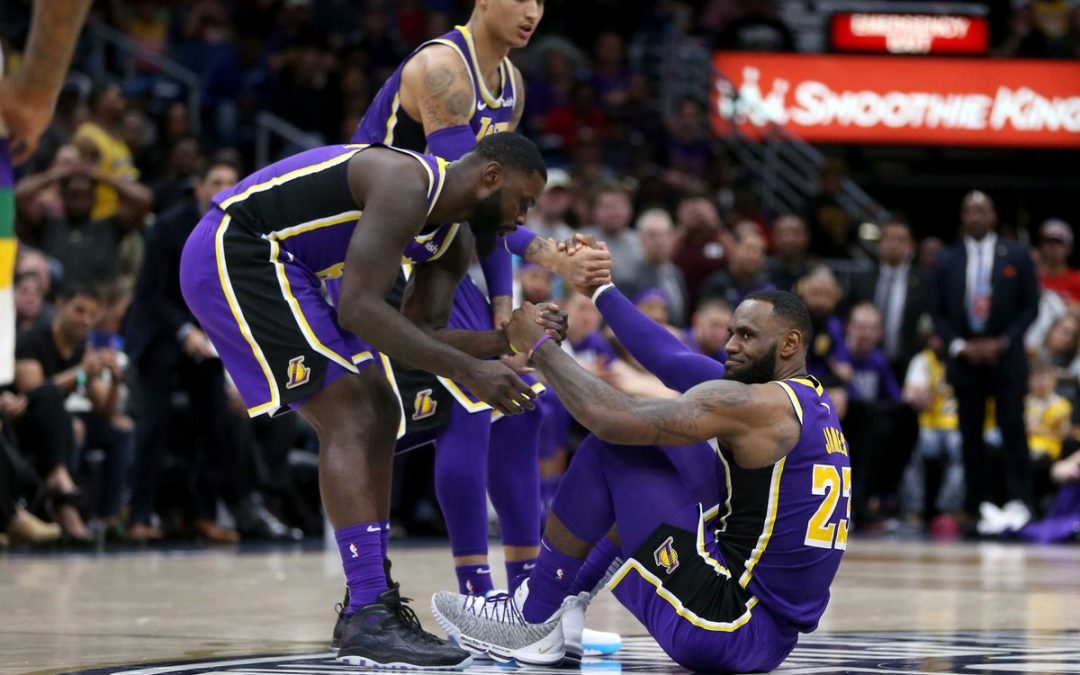 After being (understandably) shocked that the Lakers lost to the Pelicans 128-115 last night, I casually checked ESPN.com to see what impact that loss had on their odds of making the playoffs this year, and expected to see something like the 12% that they were drawing in the days leading up to the all-star break. I understood that LeBron’s history and credibility in regards to making the Finals (eight straight years) and the playoffs (every year since 2004-05) would negate the statistical odds.

My gut told me that the 3.5 game lead the Clippers have over the Lakers for the final playoff spot didn’t represent that much of a hurdle at this point in the season. But this morning, I changed my mind and decided that the Lakers play was so indicative of a destructive cycle of bad basketball that I began to become concerned. Imagine my feelings when I saw that ESPN had the Lakers at 4.8% odds this morning! It felt like a confirmation of the difficult truth I had suspected the night before.

Allow me to use last night’s game to make the following point: Hardly a game has passed this year for the Lakers between a big win (before the break) and a stunning loss (last night). Now, many of you will point out that this should be obvious for a team that has a record of 29-30 (which is two games behind the Kings, who are favored more in recent projections and have taken the Lakers spot as the team with 12% chances on the outside looking in). Those people would be right, but I would argue there are some signs that are more concerning than their record.

If, at this point in the article, you are thinking of calling me a LeBron hater, please allow me the chance to defend myself. I agree with LeBron’s recent comments regarding the urgency of his teammates at this point in the season and I do believe that he caught a bad break being injured for as long as he was. However, I also think that even though we will all blame LeBron if the Lakers do not make the playoffs, it won’t be his fault.

Whose fault will it be then? Well, I’d like to start first with management, who somehow believed that Julius Randle was incapable of contributing to their team. That certainly didn’t help in the optics of the loss last night, when Randle was having his way inside with everyone on the Lakers, who have seriously struggled against centers this year defensively. Their answer to the void left by Randle has not been nearly consistent enough, not to mention they also gave up on a 20-year old D’Angelo Russell who has turned into a superstar in Brooklyn (who, incidentally, dropped 40 last night).

Next, let’s move to the team construction. Outside of LeBron James, Kyle Kuzma and Brandon Ingram, there is not much there. If there was, they probably could have swung a deal for Anthony Davis. Now, before you think that I am just blaming Magic Johnson for no reason, I do hold LeBron accountable for being able to attract talent to come and play with him. However, it does not seem like anyone is interested in Lonzo, Caldwell-Pope, Hart, or Rondo as part of a package and those were the pieces in place to start the year. Whether that is Magic or LeBron’s fault, we may never know.

After that, let’s discuss the stars themselves. As a supporter of the up and coming stars in this league, I am a huge fan of Kyle Kuzma, who interestingly echoed LeBron’s postgame comments in his own way last night. I do, however, believe that sometimes he and Ingram play too much “hero ball” and settle for less than stellar shots. Although LeBron would love to see Lonzo come back and fill a facilitator’s role, the King is forced to not score the ball as much in the de-facto point guard role, which limits his effectiveness in helping to will his team to victory.

Last but not least, these problems have been present for the entire season and things have not changed. In the first few games of the season, a lot of the problems (such as spacing, defense, and the limitations of certain players) were evident and were not solved. To me, that is an issue with coaching. Luke Walton has been publicly criticized and looks to be incapable of fulfilling his current role. If the Lakers do not make the playoffs, he will be fired.

I could make the case that things might be worse for LeBron if the team makes the playoffs and gets crushed than if they don’t make the postseason at all. LeBron haters will hone in on his playoff record; and there will be a bevy of Kobe and MJ supporters ready to rekindle the GOAT conversation if and when he comes up short of a championship. Perhaps if they don’t make the playoffs at all, people will be more likely to look at some of the reasons I listed above as possible explanations. It certainly won’t be the first time that there is trouble in Los Angeles.