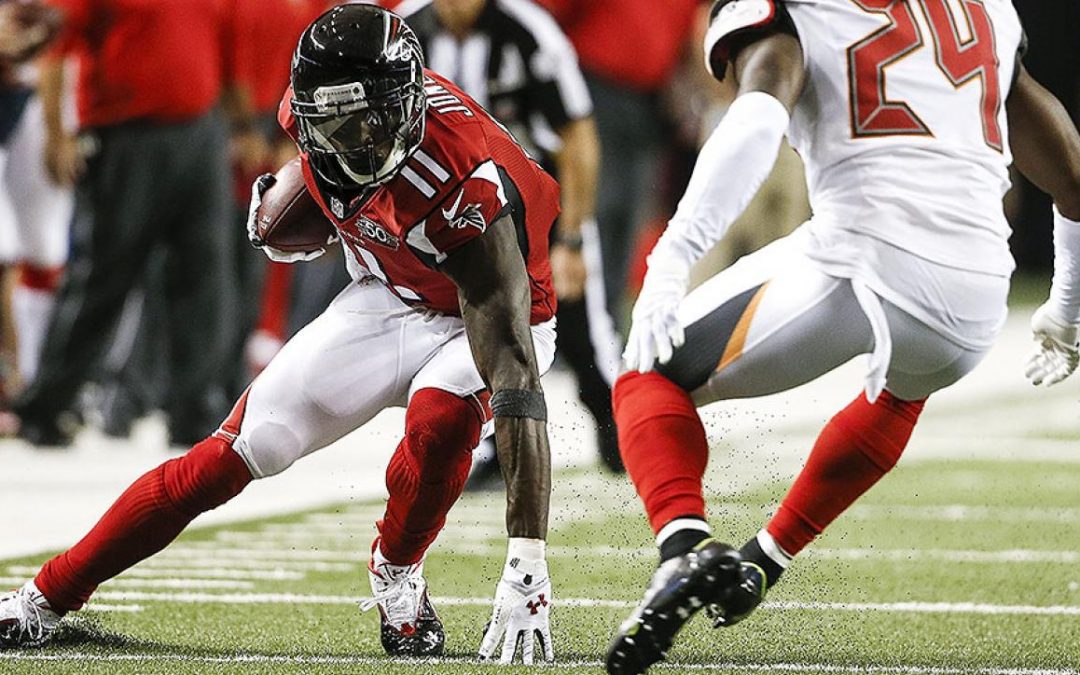 To start off these rankings, I have Deandre Hopkins; or in my little fantasy mind, Mr. Reliable. Hopkins, who has been a top WR in the league every since he was drafted, is primed for another top season, and is going to separate himself from the rest of the receivers in the league. With a quickly developing quarterback and viable surrounding weapons, Hopkins will look to remain at the top of the food chain in terms of fantasy dominance, and I am confident he will finish as the WR1. Coming in at number 2 I have Julio “no touchdown” Jones. In full point PPR, Jones finished as WR7, but that came directly from his touchdown inefficiency in the first 7 games. The lack of touchdowns is causing some analysts to rank Julio lower than usual, but I am certain that he will be able to find the end zone. Jones finished number 1 in targets(10.6 per game) and number 1 in receiving yards (104.8 per game), so the volume aside from the touchdowns is without a doubt there, and the volume will continue to be there. Another way to look at the touchdowns is if Julio were to score one touchdown in those first 7 games, he would have been WR5; and if he scored 2 in those first 7, he would have been WR3. I have faith that Julio will be able to score at least 2 more touchdowns next year that will mold him into more of an elite fantasy WR than he already is. After a breakout season and taking the title as the Packers’ overall WR1, I have Davante Adams as my WR3. With 31 red zone targets and 16 red zone receptions it is hard not to provide elite fantasy WR numbers. Although Adams is going to keep improving his craft, the Packers passing game is going to regress, which will make Adams’ numbers go down a little. The Packers will improve as a team overall, which will limit their “garbage time” points and reduce the amount of passes they throw. Still, Adams is a solid bet to take as a WR1 for your fantasy team. Speed, speed, and more speed is all I gotta say for my receiver at number 4. At 2.39 fantasy points per target and 10.8 yards per target, it is safe to say that Hill is one of the most explosive fantasy players in the game, and the big play opportunity isn’t going away any time soon. With 13 touchdowns, Hill was able to provide his owners with the complete package when it comes to yards, receptions, and touchdowns. The only reason I fade him down to the number 4 slot is the possibility of the bust games that in most situations can cause a fantasy team to lose its matchup. If you are able to pair Hill with a consistent WR2, then you are in for a great season. Going into week 4, it seemed certain that Michael Thomas was going to have a record breaking year after providing his owners with 93.8 fantasy points (full point PPR) in the season’s first 3 weeks. However, Thomas showed throughout the year that he isn’t able to sustain elite fantasy WR numbers in every game. Since Thomas scored almost one third of his points in the first three games, I am going to fade him in all of my drafts this year. He is still going to provide solid WR1 numbers, but not at the consistent level I look for in my fantasy WR. As with Hill, look to pair Thomas with a very consistent WR2 that allows Thomas to have his bust games. It seems almost cruel to have one of the games best receivers this low in my rankings when he has been the consensus WR1 for a number of years. But without knowing what the future holds, it is hard to provide a solid ranking for Brown. Number 6 is a reasonable spot to keep him at no matter what team he is traded to. The biggest stat that will determine his ranking is going to be the target share he receives on his new team (he was a target monster for the Steelers). If he falls to a lower end team like the 49ers or Jets, I could see the potential for a huge target share, which could move him up one spot in my rankings, but I am going to monitor his movement before I make a final decision. Most likely the fan favorite in this list is at number 7 in my rankings and that is JuJu Smith-Schuster. With elite run after catch and big play ability, it seems too easy to put JuJu in my top 10, and to top it off he even was number 6 in red zone targets. The only problem I have with JuJu next year is my concern with his ability to play as the number 1 receiver on the outside instead of the slot. Antonio Brown’s eventual departure will most likely force JuJu to play as the outside receiver, especially since James Washington is a slot receiver. That will leave some uncertainty with JuJu in drafts this year, but the volume and big play ability will allow JuJu to provide top 10 numbers. Coming off a solid season that was a huge improvement from the year before, I am a mega fan of Mike Evans for the 2019 season. Being on a team that is always losing and has an air raid QB and offensive scheme, it seems certain that Evans is going to often be targeted deep, as he did last year when he finished number one in air yards (9.0 per target). A receiver sitting at 6′ 5″ and 231 pounds with amazing downfield ability is primed to put up big numbers, and Mike Evans will continue to do that in the 2019 season. Coming into the 2019 season, it seemed as if there was no hope for the Colts wide receiver. The Colts were projected to have the worst record. The team that actually had the worst record, the Cardinals, had little to no fantasy production at every position. Yet with all the doubt coming into the season, the Colts defied the odds and Hilton provided his fantasy owners with amazing value for his draft position. At the end of the draft season last year, right around September 14th, Hilton’s ADP was 26 and he finished as WR13 while only playing in 14 games. He is and will continue to be Andrew Luck’s favorite target and I am comfortable having him at the number 9 spot. Yes, this is a bold take; and no, I am not ashamed to have the Super Bowl MVP at number ten in my rankings. Edelman, who missed the first 4 games due to suspension, still finished as WR23 in full point PPR; and did so in an offense that was very wide spread when it came to targets and player opportunities. Although he missed the first four games, he was still able to provide top ten production in red zone targets and receptions. With the rumors of the retirement of tight end Rob Gronkowski, and the likely departures of receivers Phillip Dorsett and Cordarelle Patterson (who combined for 9 touchdowns this year), the need for touchdowns is there. Edelman  has been a favorite target of Brady for a number of years will continue to produce amazing PPR numbers. Not to mention, he is being drafted at an incredible value in mock drafts, but like all hidden gems in mock drafts I expect his ADP to rise.

As stated in the intro these rankings are always subject to change. Go check out the full rankings video on my podcast “Top Tier Sports” and my Youtube channel, “Lukas Kacer.” It’s never too early to think about fantasy!