What the Lakers Must Do to Make the Playoffs 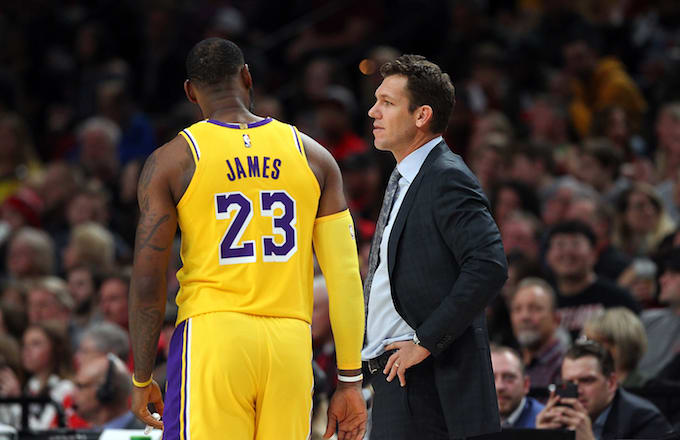 The Los Angeles Lakers have had an up and down season up to All-Star break. The Lakers have a 28-29 record coming out of the break and are three games back from the 8th spot. So far, the season has been filled with injuries and drama due to all the trade rumors that went on before the trade deadline. The big blow was the LeBron James injury. The Lakers struggled mightily without him. Here are three aspects the Lakers need to focus on to turn the season around and make the playoffs:

Head coach Luke Walton must settle on an eight or nine-man rotation and stick with it. It’s hard to do that with so many players getting injured, but it’s time to tighten things up and make a playoff push. Once Lonzo Ball is back, Luke must dial in his rotation for the stretch run. Some players will get left out, but coach Walton cannot worry about that right now; the Lakers need to win.

The Lakers have been hit with the injury bug quite a bit this season. LeBron James, Brandon Ingram, Rajon Rondo, and Lonzo Ball all have missed double-digit games this season. Nagging injuries have slowed JaVale McGee, Kyle Kuzma, and Josh Hart.

Ingram, McGee, and Kuzma are back to full strength; and with James and Rondo getting close to full strength, the Lakers should be pretty healthy after the All-Star break. Now it’s almost time for Lonzo Ball to come back and Josh Hart to return from nagging injuries.

If the Lakers can stay healthy, they should be able to regain the rhythm they had up until Christmas, when they were playing their best basketball. It will be up to the young core to step up and play well for this turnaround to happen.

The Lakers defense has been horrible the last couple weeks. They have been giving up too many open looks and way too many uncontested layups. That will have to change if the Lakers want to make the playoffs. The players will need to put forth the effort for this to happen. The team has more than capable defenders, so there is no reason for them to not turn around the defensive energy. Missing Lonzo Ball is a critical factor to the Lakers lack of defense; the defensive intensity usually starts with him. He will be back soon, but even without him the Lakers still need to defend better.

It will be a tall task for the Lakers to make the playoffs, but it can be done. They need to start finding a consistent rotation, getting healthy, and putting out a better defensive effort to make it happen.