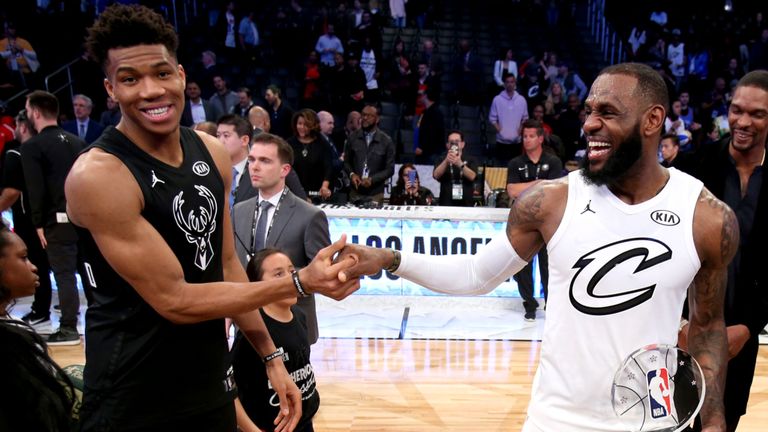 The 2019 NBA All-Star Game in Charlotte did not disappoint. Team LeBron defeated Team Giannis 178-164 after Team LeBron trailed by 20 points at one point during the game. Kevin Durant took home the All-Star Game MVP for the 2nd time in his career after scoring 31 points, grabbing 7 rebounds, and knocking down 6 threes to lead Team LeBron.

This game was full of high-flying dunks and an astonishing 167 3-pointers attempted. Giannis threw down numerous dunks and led all scorers with 38 points. Paul George and Khris Middleton were also lighting it up for Team Giannis as PG continued his hot streak, scoring 20 points and hitting 6 threes along with a beautiful 360 jam in the 2nd quarter. Khris Middleton showed out in his first All-Star appearance. He knocked down 4 3-pointers in the 1st Quarter and 6 total for the game. Charlotte native Stephen Curry also provided a spark for Team Giannis, despite shooting an inefficient 4-17 from deep. Russell Westbrook–who was acquired by Team Giannis via trade from Team LeBron–performed as well as he usually does during the All-Star game, putting up 17 points in 19 minutes of play. Dirk played well in what was almost certainly his last All-Star game of his illustrious career. He shot 100% from beyond the arc, drilling 3 threes in the 1st half, totaling 9 points for the game. It was a great way to end his All-Star career.

Team LeBron was of course led by the game’s MVP, Kevin Durant. LeBron was right there with him, scoring 19 points, grabbing 8 rebounds, and delivering some highlight reel dunks. He received an alley-oop from former teammate Kyrie Irving and longtime friend and former teammate Dwyane Wade. LeBron even threw an alley-oop to the aging Wade in what will be their last game together. Wade scored 7 points in his 10 minutes on the court.

Klay Thompson was electric off the bench for Team LeBron. He scored 20 points off of 6 threes for the game. Lillard was just as hot, scoring 18 points and hitting 6 threes himself. Kawhi Leonard had a quiet 19 points and draining 5 threes on the night. Kyrie had a respectable 13 points and Harden was quite inefficient scoring 12 points on 4-13 shooting from the field. Karl-Anthony Towns threw down a couple massive jams and Ben Simmons sniffed a triple-double with 10 points, 7 assists and 6 rebounds. Mysteriously, Anthony Davis played only 5 minutes. He finished with just 5 points on 2 attempts. He was questionable to play in the game due to a shoulder injury suffered against the Thunder on Thursday night.

The NBA All-Star game is by far the best All-Star game put on by the major sports leagues. It never fails to deliver numerous highlight plays from the league’s best players. The NBA has found a way to make the game even better by introducing the new All-Star team format that includes two team captains drafting their teams on live TV. This format has proven to make the game much more competitive and much more fun for the fans to watch.

The highlight dunks and other-worldly three-point shooting made the 2019 NBA All-Star Game one for the books. Hopefully this excitement carries into the rest of the 2018-19 NBA season and into the playoffs as LeBron looks to secure a playoff spot for the Lakers and the Warriors set their sights on a three peat.