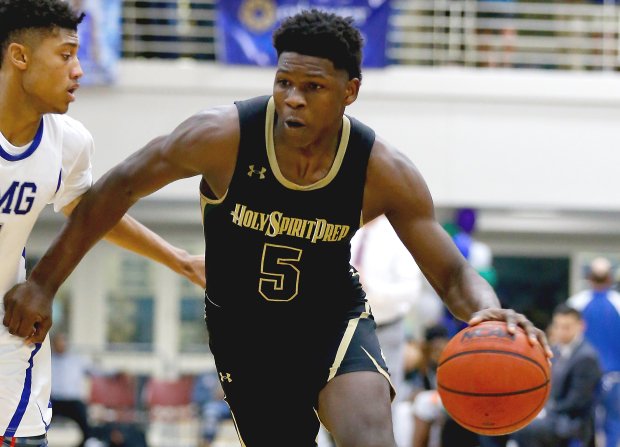 The University of Georgia has never been known to sign top recruits for their basketball program, but all that changed Monday morning. Anthony Edwards, a 6’4″ guard out of Atlanta, Georgia has committed to play for the Bulldogs during the 2019 college basketball season. Edwards is the first 5-star recruit to play for Georgia. This is a sign that first-year head coach Tom Crean has been able to change the culture for recruiting. Crean, who was the longtime head coach of Indiana from 2008 to the end of the 2017 season, always brought in top recruits to Indiana; and now is doing the same in his first season at Georgia.

Edwards is ranked as the 5th best prospect in ESPN’s Top 100 player rankings for the 2019 season. Even with how good next year’s class is, Edwards is arguably the best player in this class and is projected to go top two in the 2020 NBA Draft. He is also on pace to become just the third player out of Georgia to be drafted in the first round of the NBA Draft since 2000, and the first since Kentavious Caldwell-Pope in 2013.

Edwards is an all-around player that can do it all. He uses his athleticism to drive to the basket and can shoot the three ball. Over the past season, Edwards has hit over 40 percent from behind the arc. Edwards is also a very solid defensive player, which will be huge for a Bulldogs team that is currently struggling mightily right now in SEC play. He is great at challenging shots and can get up and grab rebounds.

According to scouts, he is basically a mini-KD where he is tall enough that the defense can’t block his shot and quick enough to blow right by defenders for an easy lay-in. I am not saying he will become the next Kevin Durant, but this does give insight on Edwards’ style of play.

Edwards is very excited to be playing his college career at Georgia and when asked about signing with the Bulldogs, he said, “The reason I picked the University of Georgia is because it’s my home school…I want to put the state school back on the basketball map. Tom Crean is a great dude, and I believe in him coaching me and developing me. On my visit we watched film together, and he talks with so much energy.” This could be a very dynamic player-coach duo with Edwards being such a highly ranked prospect and Crean being such a well-respected coach. Crean is not going up against the Michigans and Ohio States anymore, but his recruits will need to be ready to go against teams such as Kentucky and Florida.

Crean also stressed the importance of coming to Georgia not only for sports reasoning when asked by reporters on the Edwards commitment by saying, “There’s no reason if you’re in the state of Georgia that you need to go anywhere else…Everything is here and it starts not only with the beauty of this campus but the unreal quality of the education here.”

The college basketball world better be on the lookout for Anthony Edwards in 2019 as well as for Tom Crean and future recruits to the University of Georgia. Crean is doing whatever he can to make people stop saying Georgia is just a football school.