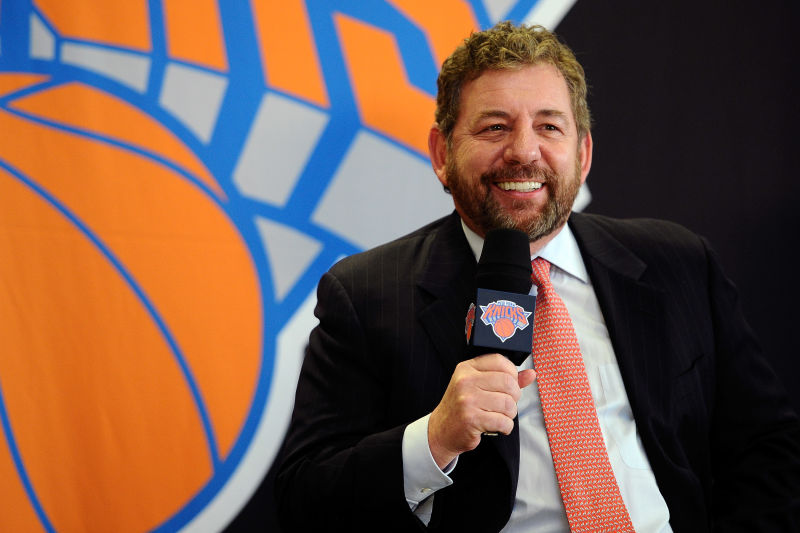 In a week where the biggest story in sports should have been what the last two remaining teams in the NFL were doing to prepare for one another come this Sunday, it was the NBA that got all of our focus and attention instead. On Thursday afternoon, the New York Knicks and the Dallas Mavericks engaged in a trade that sent Knicks star European center, Kristaps Porzingis, as well as three other guards to the Dallas Mavericks in exchange for the expiring contracts of DeAndre Jordan and Wesley Matthews, along with young point guard Dennis Smith Jr. and two future first round picks. Like a great magician that likes to divert our attention onto a particular object only to spring something completely surprising and unexpected on us somewhere else, James Dolan and the Knicks front office did a decent job in pulling off their best Houdini impersonation when orchestrating this deal.

For a few days before this blockbuster deal went down, there were rumors that star Pelicans center Anthony Davis wanted out of New Orleans and onto a team where he could contend and be surrounded by legit NBA talent. Teams like the Lakers, the Celtics, and even the San Antonio Spurs were being thrown around as possible landing destinations for the seven foot all star. But here in New York, it was the Knicks who were being touted as the top candidate to land the Kentucky Wildcat prodigy by the local media outlets. New York had the draft picks and the young talent in Porzingis needed to acquire Davis in a deal. It seemed like everybody, both nationally and locally, was weighing in on the possibility of Porzingis being sent away as the main piece of a trade that would land Anthony Davis in the Big Apple.

However, this wasn’t the case. On Thursday afternoon, after reports that Kristaps and his agent had a sit down meeting with Knicks General Manager Scott Perry and Knicks President Steve Mills to express his dismay at the direction the team was headed, the Latvian big man was shipped out of New York. Whether or not this was a spur of the moment trade prompted by an earlier meeting between Porzingis and Knicks management or whether this was a trade that was coordinated and discussed by both teams weeks in advance is still up for debate. But for now let’s discuss why the Knicks even considered such a deal.

Despite the transcendent talent that Kristaps Porzingis is, from January of 2016 to February of 2017, the Latvian star suffered six different injuries. That’s right, six! These injuries consisted of his right foot, right ankle, left leg, right shoulder, groin, and most recently a torn left ACL. Throughout the history of the NBA, dating back to the days of Bill Walton and up to the Yao Ming era in Houston, towering big men with a history of lower extremity injuries generally have had a hard time lasting long in the league no matter how dominant they were. For the Knicks to rely on such an injury riddled player to build their whole franchise around going forward would be just too much of a risk for even James Dolan to take.

Next, let’s take a look at the economics side of this trade and how it could benefit New York. The upcoming free agent class of 2019 is going to be dubbed the “K” class because of the insane amount of talented players it will have whose names begin with the letter “K” (Klay Thompson, Kevin Durant, Kemba Walker, Kyrie Irving and Kawhi Leonard). With a slew of big names up for grabs this summer and the Knicks also in position to obtain potentially a top 3 draft pick in this year’s draft, it was enticing for them to free up as much cap space as possible to have a chance to land two max free agent players. After all, landing a top rookie player and combining him with two franchise changing talents via free agency can catapult a team from laughing stock to title contender in a hurry. As a result of the Porzingis trade, the Knicks now are projected to have $73 million in salary cap space this summer, enough for two max contracts.

But as with anything in life, nothing is a guarantee. The Knicks have been mired in futility and have been known as one of the worst run franchises in the NBA for 16 of the last 18 NBA seasons. To think that players like Kevin Durant and/or Kyrie Irving would drop the promising situations they are in now to play for a poorly run franchise in the Knicks is just too naive.

We all know money talks; but apparently for today’s generation of players, legacy seems to be more paramount. Winning rings and being around other like minded players and organizations that put championships over dollar sign amounts seems to be what most elite NBA superstars are searching for in today’s game. If talent is the number one currency to acquire such banners and accolades, the Knicks are clearly not at the forefront of enticing free agents because they trade their young talent away. Porzingis was probably the most talented draft pick the Knicks have had since they picked Patrick Ewing way back in 1985. Now that he’s gone, the possibility of using KP as a magnet to lure top tier free agent talent who would be energized about playing alongside the European center in his prime is closed.

Knicks fans also have reason to be leery that their front office management can even choose the right combination of free agents that will bring prosperity to the Big Apple this coming summer. After all, it was Steve Mills who foolishly gave Tim Hardaway Jr. a four year, $71 million contract before GM Scott Perry was even hired back in 2017.  With that type of questionable judgement, who knows what’s in store for the quality of future signings going forward?

At the end of the day, it’s the hope and faith that GM Scott Perry and Knicks President Steve Mills can draft the right combination of talent to make the Knicks relevant again that Knicks fans are banking on. The message ownership wants to emanate to the fans from this recent trade seems to be, “If you can just be patient, we’ll deliver the goods this summer.” And if for some reason they can’t, well we just have to endure another 15 win season next year and hope we strike it big in the draft and free agency in 2020. Unfortunately, history has shown us that owner James Dolan just isn’t that patient of a man. Time and time again he has impulsively forced his management team to overpay for veteran talent past their prime just to stay relevant in the headlines. Why should this summer be any different?

For now, all we can do is just cross our fingers and hope.