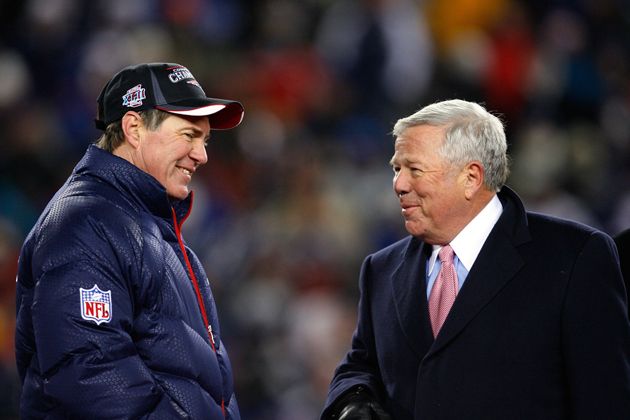 The story is famous. It involved a disgruntled head coach, a rookie wide receiver with break neck speed out of Ohio State, and a meddling owner who had the last say in all things team-related. On his way out, after taking an absolute pounding in the Super Bowl by the Green Bay Packers, head coach Bill Parcells said “if they want you to cook the dinner at least they ought to let you shop for some of the groceries.” He wanted to pick a defensive player.  Patriots’ owner Robert Kraft wanted Terry Glenn.

Parcells was traded to the New York Jets that offseason, taking his staff with him and making sure that ownership knew he wanted his assistant head coach Bill Belichick to take his place after he retired. The Patriots were compensated with four draft picks for Parcells that new head coach Pete Carroll was given the chance to use to load up his roster. That didn’t go so well, as none of the picks the Patriots received from the Jets ended up being starters. After three seasons with a decline in team performance every season, Kraft let Carroll go.

Robert Kraft knew who he wanted as his coach. Problem was, so did Parcells, the GM of the New York Jets. At the time, Bill Belichick was the Jets coach. In order for Kraft to get his guy, Parcells made Kraft trade a 1st round pick to New York for Bill Belichick, which he agreed to willfully.

Bill Belichick was ready. Taking cues from his early days on the Navy sidelines with his dad as coach, his days in Cleveland making not so popular choices as head coach, and his time as defensive coordinator for Bill Parcells’ New York Giants. He took this Patriots opportunity head on. Getting his house in order didn’t take too long and after going 5-11 in year one, he took the Patriots to an 11-5 record and won the Super Bowl in year two.

For his entire career, Belichick’s coaching style has been strict and smart. His coaches buy into his system and work hard. He’s notorious for signing players with little flair and great work ethic. He sees things in players that others miss. He finds ways for his offense to consistently keep defenses off guard.

He also demands perfection out of everyone. He once sent four players home from practice when they were late because of a blizzard. Wes Welker was benched for the first few plays of a playoff game for making obscure remarks about Rex Ryan and his wife’s extracurricular activities. Malcolm Butler was a healthy scratch in the Super Bowl for reasons that may never be known. Stevan Ridley was a healthy scratch after constant fumbling issues and was seen on the sideline holding a football during the game (likely a punishment). Belichick even has a tendency to let opposing players know when they’re not acting the way they should be–even barking at Adam Thielen and Derrick Mason from the sideline.

Belichick is tough. He runs a tight ship. But he’s also on his way to his twelfth super bowl appearance as either head coach or an assistant coach. What he does works.

Robert Kraft is now a fan/owner. He has the last word in how much money the team spends, but Belichick and his staff pick the players and the terms. A trustful relationship was built somewhere along the road and it’s worked out quite well. Kraft is a businessman and cares about the bottom line; Belichick treats the Patriots like his business and cares about the bottom line. For eighteen years now it’s seemed to be a perfect match. It’s anyone’s guess how much longer it will last.