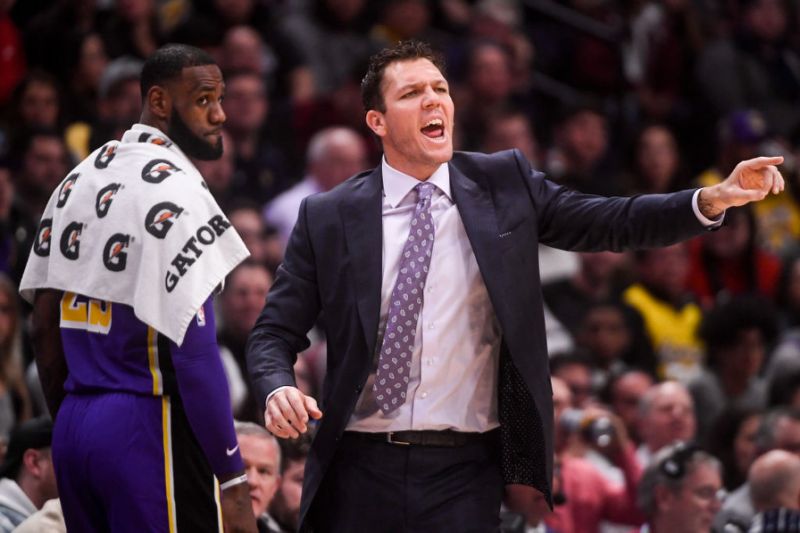 With all the speculation and rumors about Anthony Davis ending up on the Lakers after he requested a trade, the Lakers still have a lot of problems to solve that cannot be fixed by a trade–even if it’s for AD. Aside from the obvious problem of too many injuries, the Lakers need to do something to cure their horrible offense. Aside from being 4th in pace and 3rd in fast break points per game, their offense has been awful as they are currently 21st in offensive rating (107.5), 22nd in assist percentage (57.4%), 28th in 3-point percentage (33.6), and dead last in free-throw percentage (68.6%).

LeBron James has a reputation as a “Coach Killer,” and it continues after the report last week from Jackie MacMullan that his camp would prefer a coaching change. The Lakers have dropped from 4th to 9th in the standings since LeBron’s groin injury and are currently 6-10 without LeBron. Luke Walton’s job security has been in doubt since LeBron signed with the team. There are questions regarding if he is the right coach for a team that has high expectations and is in win-now mode after spending his first 2 years as a head coach prioritizing youth development more than anything else. But even before LeBron’s injury, when the Lakers were playing like a legitimate title contender, ESPN’s Adrian Wojnarowski reported that Magic Johnson and Rob Pelinka had been “hoping to get their own coach in at some point” because Walton “[didn’t] fit the mold” of the type of coach they are looking for.

Right now, it looks like Jeanie Buss is the only thing preventing Magic from firing Luke as Jennie herself made it known during an interview on “The Lowe Post” a few weeks ago that everyone in the organization, including Magic and Pelinka, are behind Luke. And just a week later, another report came out indicating that the Lakers still have “strong” belief in Luke Walton’s coaching abilities. The report makes sense as he has improved the team’s record by 9 wins in each of his first 2 seasons as head coach by getting the young core to buy in to being a great defensive team–13th in defensive rating last season (even though Lonzo and Ingram missed 53 games combined) and 7th this season (5th in the last 15 games).

Luke is obviously an exceptional defensive coach, and he can be a great coach overall if his offense come around. But in his two and a half seasons as head coach, his offensive system has shown no signs of improvement and somehow looks worse than ever this season–especially considering where LeBron’s teams have ranked in offensive rating over his 16-year  (3x below average, 11 times top 10, 8 times top 5, and only 3 times below average).

Let’s assume that the Lakers get Anthony Davis by trading Lonzo, Ingram, Kuzma, KCP and a first rounder; is Luke’s offensive system and an AD-LeBron duo enough offensively to counterblow the “Lonzo, Ingram and KCP-less” Lakers defense? Is fast pace offensive approach good for 34-year-old LeBron, who is signed through at least his age-36 season? And what if the Pelicans hold onto Davis until the summer and the Lakers current roster stays intact through the trade deadline? Can the team make the playoffs and make a deep playoff run by relying so much on LeBron and the team’s overall defense? Maybe not, but since the team only has 32 games (14 home, 18 road) remaining to make the playoffs and are 1.5 games back of the 8th place Clippers, now is not the time to fire Luke. The Lakers only hope is that the Lakers get AD and/or shooters, or the current roster plays the way they played before LeBron’s injury and Luke rises to the challenge.

We’ll see if how the rest of the season plays out when LeBron is back but if the Lakers came down on choosing between LeBron and Luke, Lakers wouldn’t make the decision for too long and certainly worth monitoring going forward.