The Group 5 Playoff That We All Want to See 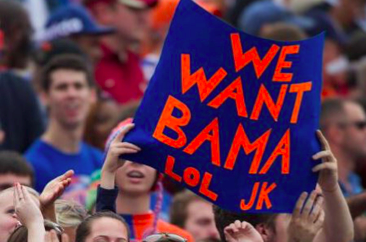 By we, I really mean UCF. But in all honesty, who wouldn’t want to see the Group 5 powerhouses play in a postseason that means something? That wouldn’t mean dissolving the bowl system that we all love or expanding the 4-Team Playoff, either. Having a G5 playoff would eliminate watered-down bowls (like the this years Fiesta Bowl) and add an actual playoff for these teams to be competitive and finish a season as a G5 National Champion.

The Fiesta Bowl was fun. But if UCF had gone on to win, it would have further fueled the disillusioned Americans who think that UCF could take on the likes of Alabama. To be honest, LSU doesn’t even match up to Alabama, and LSU had all their star players on the field.

I get it. We see a team go undefeated and instantly want to put them in the same breath as Alabama or Clemson. The reality, however, is that power five schools can’t unseat them, let alone a team of well-coached, 3-star recruits. Please don’t take that as me saying they can’t win a single game against a top 5 school. In a one-game setting, any team in D1 football has some chance to beat the other. But we’re talking a playoff system, which means multiple wins. Even if we expand this bad boy to eight teams, UCF, or a team of their creed, would need to pull one of football’s bigger upsets three times to be crowned champion. Before I hear someone bring up A Cinderella Story from March Madness, let’s remind ourselves how different the games we’re comparing here are.

If the Appalachian State team that upset Michigan in 2007 played in a 10-game simulation, even with a split home field advantage, they win one out of ten times. It makes no sense to reorganize the top-end of college football to let the team destroying the American conference get their butts kicked against a team where their best player isn’t sitting out for the draft. As much as I’ve voiced my opinion for UCF to be taken seriously in the past, the fact of the matter is that adding more teams won’t make it more competitive. It would just lead to more blowout wins like we see in the first round every year.

To me, UCF’s performance signals not that they are ready for schools like Alabama or Clemson, but that we, the fans, are ready for a true second playoff within D1 football. But how do we fit two playoffs within one level of play? It’s easy. HBCU schools do it every year at the FCS level. For those of you who don’t know, HBCU are schools like NC A&T and Grambling, who play in the Division 1 FCS level. They play out-of-conference games in FBS/FCS while remaining their own separate entity. When playoff time comes around, instead of playing with the likes of North Dakota State, the HBCU schools play themselves and even crown an HBCU National Champion. This is how we answer the playoff expansion question. A true competitive playoff that runs outside the Power 5. This gives fans more content that’s actually enjoyable to watch, while saving a team like UCF from getting slaughtered by Bama. This Is How We Do It

For this to work fairly for all G5 Schools, the playoffs would be an eight-team format, with the first five seeds belonging to the winners of the G5 conferences (American, CUSA, MAC, Mountain West, and Sunbelt). The last three spots would be the three next-best G5 schools, which would be determined by a CFP subcommittee assigned to ranking the G5 schools.

With an eight-team format, there would be seven postseason games in total. The first round (4 games) would consist of the lower bowls that begin in mid-December (e.g. Idaho, Frisco, and Bahamas Bowls). The semifinal round would incorporate slightly bigger bowls that take place a week or so later (e.g. Independence and Cheez It Bowl), with the final round being a whole new one entirely. This would make few adjustments to the current bowl system while adding a whole playoff inside of it.

If I know the NCAA, and I do well, they love an opportunity to make more money off games. This is right down their ally. Not only does it add importance to the lower bowls, but it makes them more watchable. Think about it. How exciting would it be to watch a whole playoff before a NY6 bowl even appears? This would also free up spots in bowls for more P5 schools to play in. If a team like UCF is going to play in a postseason, they deserve to play in one where the whole team’s goal is to beat them, not where their players are focused on the NFL, or still reeling being left out of the playoffs. The schools in the top of the G5 have amazing fan bases, who really do show out when given the chance (e.g. UCF College Game Day).

Let’s do right by the fans, the players, and college football as a whole, and usher in the era of the P5 and G5 national champions.